Biologist, chemist, cryospheric scientist, and remote sensing scientist. Karen Frey, a research scientist and professor at Clark University, dabbles in each, identifying herself as “a remote sensing biogeochemist with an interest in ice.” The approach has allowed Frey and her team to think about science questions in a new way, and to study Earth systems science where the disciplines come together at the seams — a key theme for the ICESCAPE mission. 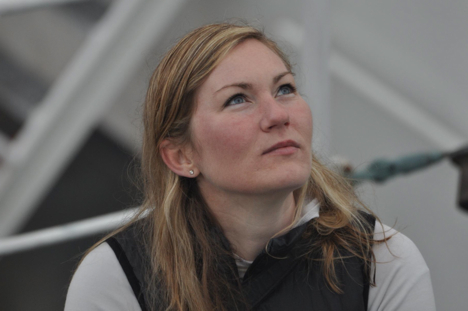 ICESCAPE: We’ve previously spoken with a systems ecologist and sea ice geophysicist. How are you involved with the ICESCAPE mission?

Frey: My interest is to bridge the two. I’m a biogeochemist by training but I have experience with ice work as well, so I’m interested the interface between the disciplines — how physical characteristics of the ice are driving the biology and biogeochemistry beneath the ice.

At ICESCAPE’s ice stations, our team quantifies the light field beneath the ice with optical instruments. Light is important for biology and primary production, for determining what kind of critters grow in and below the ice. We also collect ice subsections that we melt so we can filter the ice water and measure its biogeochemical variables: salinity, alkalinities, chlorophyll, oxygen isotopes, suspended particulate matter …

Ice stations are our primary goal, but we’re also sampling and filtering water from the CTD/Rosette and collecting mud from the Van Veen grab to quantify the sediment chlorophyll. [Watch a video of Frey describing the Van Veen grab.]

The mud is interesting because many of the areas we’re sampling are in shallow waters. If we’re sampling in 50 meters, even 100 meters, you have strong coupling between the water column and the sea floor. Algal biomass settles on the seafloor and starts a new food web. But now that we’re off the shallow shelf and in deep water, that’s less important and less interesting.

ICESCAPE: If you could chat with your class right now, what would be the first thing you would tell them about your current experience up here?

Frey: I teach an Arctic system science class, a paleoclimate course, GIS courses, and I have taught remote sensing and a lot of climate related courses. I try very hard to incorporate my first hand research experiences into the class. Whether it’s the data or just photos, I have put together a really a valuable archive of things I can put together to translate to the students. I think they get more out of it, they sense the enthusiasm that I get out of field work, and I hope they think, “wow there are really neat things I can do as a scientist.”

People are intrigued by the megafauna, but also about the ice; what it looks like and feels like. People might feel that it’s scary to walk on sea ice — that they’d fall through — but it’s surprisingly very sturdy, you don’t feel like you’re floating.

ICESCAPE: How does this cruise compare to other Arctic field work?

Frey: My first time walking on sea ice was during field work in March 2008 on the Healy in the Bering Sea. That was an experience. Now, when we have a mix of ice and open water, temperatures pretty much stay around freezing. It can actually be quite warm feeling when the sun’s out. But in March — the time of the annual sea ice maximum — it’s a totally different story.

There was a lot of ice insulating warm ocean from cold air like a blockade, and we typically had temperatures of -40 F. it was incredibly cold. My eyelashes froze. I remember trying to talk to people out there to get or give instructions and after awhile you can’t speak because you can’t physically move your face.

In March, it’s a very different icescape. There are no melt ponds. Snow drifts can be waist deep. It’s a vast expanse of white, but you still get 12 hours of sunlight. 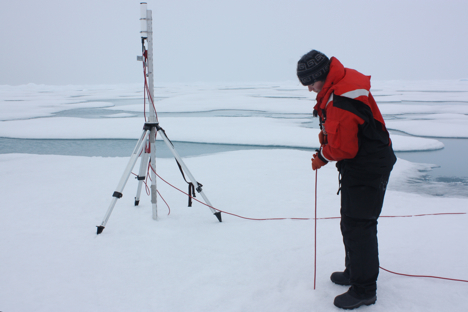 On July 6, 2011, Karen Frey deployed an optical instrument to measure the optical field below sea ice. The measurement is part of Frey’s routine at the 10 ice stations during ICESCAPE. Credit: NASA/Kathryn Hansen

ICESCAPE: Work hours are long up here, what motivates you to come out on these field campaigns and work night and day?

Frey: It’s the one opportunity I have to get away from my desk. It’s really interesting because for most of the year I have desk-job hands. I don’t have the opportunity to do things for much of the year but when I get out here I realize you get to actually physically take samples and you watch your hands and realize I’m actually getting away form the desk. I think it’s so important to see and watch first hand the world you’re measuring. If you don’t have that, you don’t really know what you’re studying.

I’m interested in interfaces and bridging things, so I think Kevin and Don and I are all interested in similar things but I look at myself as someone who can bridge the two. In a similar way I’m really interested in bridging and interfacing satellite remote sensing with field observations. You really can’t do one without the other. With field observations you can only be in one place at a time. The beauty with remote sensing is you can spatially and temporally extrapolate those measurements. Satellites give you a really powerful synoptic view of what’s going on. It’s an incredibly complex system up here. If you’re only doing field work then you’re losing a big part of the picture. But there is a lot of heterogeneity. Early ice stations to the west were a lot different that current stations, and you wouldn’t necessarily know that from looking with satellites.

ICESCAPE: How did you come to be a “remote sensing biogeochemist with an interest in ice?”

Frey: It’s funny because for a long time I couldn’t define myself. I have all kinds of experience: marine, terrestrial, remote sensing. For a long time that troubled me because if I can’t define myself, what am I? The more that I further myself in my career I realize I can use that to my advantage. I can be involved in different disciplines and understand how everything comes together. It’s at the interfaces of disciplines where the interesting things happen. The seams are where the action happens. You’re thinking about things in a different way, formulating new science questions.

This cruise is very much about bridging disciplines and looking at the seams of science. Before this cruise I thought of myself as an anomaly, but now I see I’m not the only one! I found a niche and who knew you could fill a ship with remote sensing biogeochemists and biologists, but you can! Probably the most famous of which are on this cruise. It’s a great experience for the scientists but the students as well.

I never used to want to be a professor because I though it was an isolated job sitting in your office thinking about research papers. Instead, it’s all about thinking of cool ideas and working with your colleagues and mentors. I think the most fun part is the collaboration aspect. Out here, out with 50 collaborators, we’re all learning from each other. We’re all a piece of the puzzle and ultimately we’ll try to come up with a cohesive picture. That’s the fun part of science.

3 thoughts on “Q&A With Karen Frey: At the Seams of Science”