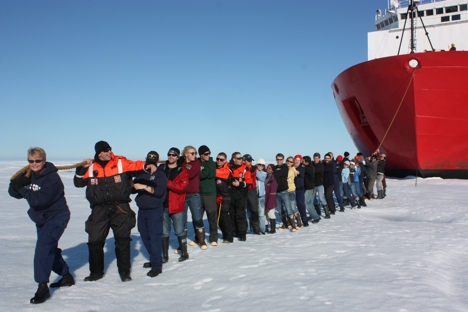 On Tuesday, July 12, ICESCAPE completed its 100th sampling station in just 15 days. Now in the home stretch, science teams are relieved to be over the mission’s hump day and took a break on July 13 for “ice liberty.” Festivities included a penguin riding a unicycle (a penguin in the Arctic?), iceball fights, and a game of tug-o-war with the Healy (above). Needless to say, the ship won. Credit: NASA/Kathryn Hansen

July 13 marked the completion of ICESCAPE’s sixth ice station. So far, teams on the ice have noticed an interesting phenomenon related to the way sunlight interacts with the sea ice. “There is more transmittance of light than I would have thought,” said Don Perovich, of the Cold Regions Research and Engineering Laboratory, who leads the ice teams. “This confirms a result we found at a station during the cruise last year.”

In the open ocean, the water becomes darker as you dive down where less light penetrates. The same holds true in water below an expanse of bare ice. Descend below sea ice littered with melt ponds, however, and the water column actually grows lighter before getting darker. Melt ponds are like skylights. Depending on the geometry and location of these skylights, the water column below any given melt pond could receive light contributions from other distant ponds.

The difference could matter for the phytoplankton communities beneath the ice that depend on light to bloom, although exactly how much light they need remains uncertain. 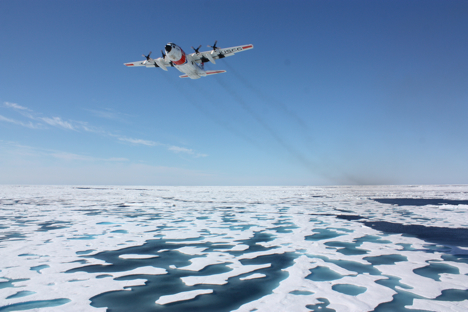 A different kind of excitement hit the sea ice on July 12, as a C-130 overflew the Healy and dropped a small case of supplies onto the ice. Scientists and crew gathered on all decks to watch the operation, and possibly to revel in the short-lived contact with civilization. Credit: NASA/Kathryn Hansen 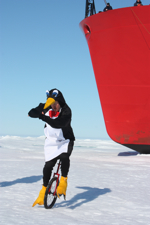