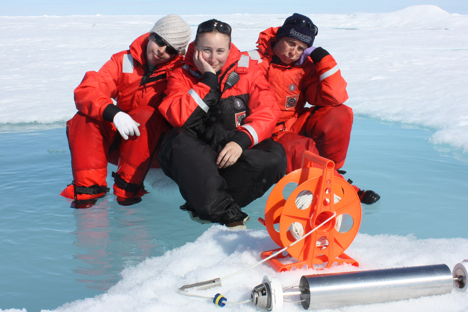 We couldn’t have asked for better weather on July 19 for the ninth and final ice station of the 2011 ICESCAPE campaign. Inside the thick, orange mustang suits it felt as balmy as a day at the beach as teams expertly collected the last data set from the sea ice. “We finally hit our stride,” said Don Perovich of Cold Regions Research and Engineering Laboratory, who leads the on-ice efforts. With a few final reflections on the weeks of work and the spectacular sights, we boarded the Healy one last time and steamed south beyond the ice edge. 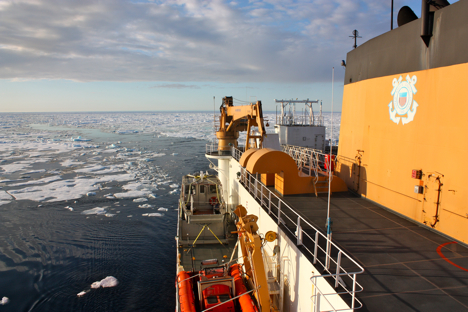 The Healy cruised south through thin broken sea ice and ultimately into the open ocean by midday on July 20.

Today, with just a few more days of ocean sampling remaining, we entered shallow shelf water just 25 meters deep to see the influence of discharge from the Coleville River.

On July 20, the Healy exited deep ocean water (left) that appears dark blue. On July 21 we entered shallow water on the shelf, which takes on a greener appearance (right) due to the influence of everything from chlorophyll and colored dissolved organic matter to sediments. Satellites also see ocean color, and ICSCAPE is helping scientists parse out the relative constituents.

Tonight the Healy heads back west toward the Chukchi Sea to check out what’s happening in Barrow Canyon.