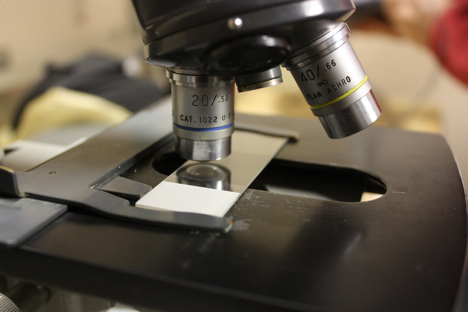 At the end of every day, William Balch, of Bigelow Laboratory for Ocean Science, retreats to a dark lab toward the Healy’s stern and stoops over a microscope.

“I have been on ships with some of the hottest technology for measuring all of these cool things,” Balch said. “There will be people doing molecular studies, looking at genetics, looking at absorption and scattering — all important processes in the ocean — but they don’t have a clue about what organisms are actually there.”

To see what’s actually in the Arctic Ocean, Balch brought a 1970s American Optical microscope along on the ICESCAPE mission. The device originally belonged to Charlie Yentsch, a science team member of the first ocean color scanner to go into space. Yentsch made his name understanding how light interacts with phytoplankton, and has founded three oceanographic laboratories. Newer, however, are the four different filters that allow Balch to see the ocean’s organisms in different light.

White light (left) is the microscope’s standard background light (modified en route during this campaign). Light passes through the slide and illuminates the entire soup of ocean contents on the slide. Here we see the domination of diatoms, a common type of phytoplankton, in a sample collected on July 16 from 42 meters deep in the Arctic Ocean. Everything from the large ribbon structure down to the tiny individual cells are all diatoms, which have been a the dominant player in the ICESCAPE cruise.

The next filter (right) takes advantage of an optical effect called birefringence, which occurs in limited materials. The diatom ribbon clearly contains such a material, but it’s most common in a type of phytoplankton called coccolithophores, the primary focus of Balch’s work. Coccolithophore calcify and make tiny calcium carbonate plates that can be seen from space as turquoise swirls, and also from under a microscope via birefringence.

Balch’s team looks for calcium carbonate in water collected at depth from sampling stations, from ice cores, and on the fly from a system that analyzes water while under way. Finally, Balch sits down every evening for a quick peek under the microscope.

“The whole idea of the work we’re doing is to see whether the coccolithophore are moving into the Arctic realm,” Balch said. “Most of the coccolithophores we’ve seen so far turned up as we passed through the Bering Strait and before we got into the ice.”

The third filter (left) bounces blue light down through the objective of the microscope onto the cells and they fluoresce red where chlorophyll is present. The fourth filter (right) uses green light to reveal plants with the pigment that powers photosynthesis.

“On this cruise we’re lucky, we have Sam Laney [of Woods Hole Oceanographic Institution] who runs the Imaging Flow Cytobot, and that’s much more quantitative in terms of saying there are so many of these and so many of those,” Balch said.

“However, with a 2.2MB image I can get detail on these things and send them to a taxonomist. It’s like being in an airplane looking down and being able to see that there are houses down there and rivers … its jungle that you’re looking at, and the biology is just another piece of the puzzle.”