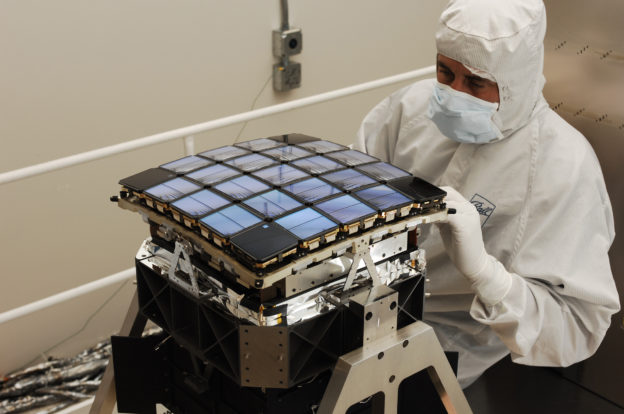 As reported in last week’s update, the Kepler spacecraft’s photometer—the onboard camera—was commanded to return to science after being found to be off during a routine contact on Thursday, July 28. Yesterday, the team confirmed that the photometer responded as expected and began collecting data again on Tuesday, Aug. 2.

Yesterday’s scheduled contact with the spacecraft was made using the 70-meter dish at NASA’s Deep Space Network (DSN) at Goldstone, California. The large dish provided the necessary communications link with the spacecraft to confirm Kepler was back doing science.

Our investigation of the cause centered on the focal plane detector modules. The signature of the recorded faults surrounding the anomaly was reminiscent of an event in January 2014, when one of the science detector modules (Module 7) failed. In that case, we concluded that the most likely cause was a random part failure that resulted in a high electric current in the circuitry, which blew the protection fuse, disabling the detector but preventing the problem from propagating to other detectors. As part of the fault protection response, the photometer was powered off. Thus, it seemed likely that this most recent anomaly might be the result of another random detector failure—something to be expected as we continue to extend the spacecraft’s mission.

Analysis of the temperature data from the focal plane seems to bear out this hypothesis, and points suspicion to science detector Module 4, as the likely culprit. When we turned the photometer back on, all the other modules warmed up at a consistent rate, while Module 4 reacted more slowly, and never reached full operating temperature before the DSN contact ended.

As part of our standard contact procedures yesterday, we brought down a few pixels from the focal plane to verify the precise pointing of the spacecraft, and some of these pixels were from the suspect Module 4. The data from these pixels failed to register its assigned target star, while pixels from other modules produced the expected signals from their assigned target stars. Therefore we are relatively certain that this detector has indeed failed.

For the K2 mission’s current Campaign 10, the targets that were assigned to Module 4 will yield no further science results. For the campaigns going forward, we will select targets which fall on the remaining operational detectors, which will have little to no impact to the upcoming science.

Such hardware failures were foreseen in the initial mission planning, and the system design is robust and compartmentalized to minimize the impacts. After more than seven years in the harsh conditions of space, 85 percent of Kepler’s original detectors are still operating. Module 4 will be the third of the 21 science modules to have failed in-flight.

Kepler’s primary mission ended in 2013 but exoplanet and astrophysics observations continue with the K2 mission, which began in 2014. In June, NASA Headquarters announced that Kepler is to continue science operations through the end of the FY19, by which time the on-board fuel is expected to be fully depleted.

To-date, Kepler has identified more than 5,100 planet candidates, of which 2,454 have been verified as bona fide planets. NASA’s Transiting Exoplanet Survey Satellite, scheduled to launch in 2017 or 2018, will continue Kepler’s success and search for exoplanets closer to our own solar system.

During a scheduled contact with NASA’s Kepler space telescope on Thursday, July 28, the team found the photometer—the camera onboard the spacecraft—powered off. The photometer was turned on again and the flight system returned to autonomous science operations on Monday, Aug. 1. We will confirm that science operations have been resumed within a week. The team is currently investigating the cause; the spacecraft is otherwise operating normally.

The Kepler spacecraft is currently in the tenth observing campaign of its second mission, called K2. Kepler’s primary mission ended in 2013 but more exoplanet and astrophysics observations continue with the K2 mission, which began in 2014. To-date, the K2 mission has identified more than 450 new planet candidates, of which 128 have been verified as bona fide planets.

In June, NASA Headquarters announced that the K2 mission is to continue science operations through the end of the FY19, by which time the on-board fuel is expected to be fully depleted.