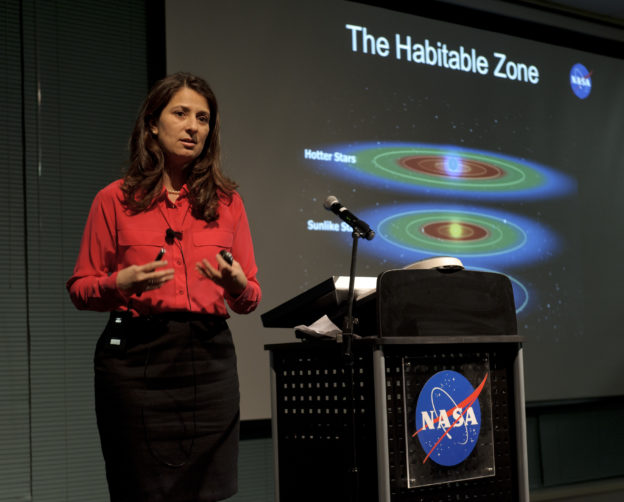 This week Natalie Batalha, NASA’s Kepler mission project scientist, is in Cambridge, Massachusetts, where she will receive the 2017 Lecar Prize from the Harvard-Smithsonian Center for Astrophysics (CfA). The award, now in its fourth year, recognizes exceptional contributions to the study of exoplanets — planets outside our solar system — and theoretical astrophysics. Batalha is the first NASA employee to receive this honor.

“The scientific success of the Kepler Mission is the direct result of the vision, creativity, persistence and leadership of people like Natalie Batalha. Dr. Batalha is one of those very rare people who are not only gifted scientists, but who can also marshal the talents of a diverse group of engineers, scientists and managers toward the kind of phenomenal success that Kepler represents,” said Matt Holman, chair of the prize selection committee and senior astrophysicist at CfA. “We are thrilled to be able to recognize Dr. Batalha’s contributions to exoplanet science by awarding her the 2017 Lecar Prize.”

The prize is named for Myron S. “Mike” Lecar, who was with the Smithsonian Astrophysical Observatory from 1965 to 2009 researching planet formation and the dynamics of gravity and our solar system.

Each Lecar Prize recipient is offered an honorarium and delivers a lecture at the Harvard-Smithsonian Center for Astrophysics. Batalha will give her lecture on April 6, about Kepler’s forthcoming final planet catalogue and the measurements of the survey completeness and reliability required to study exoplanet populations.

Batalha has been with the Kepler team since the space telescope was still on the drawing board, and has served in various science leadership roles. She led an analysis that revealed the first rocky planet Kepler found outside our solar system, called Kepler-10b, in 2011. Now, as the project scientist for Kepler at NASA’s Ames Research Center in California’s Silicon Valley, Batalha is preparing for the end of the prime mission. That will come when the team delivers its final planet candidate catalog and associated data products in the summer of 2017.

Batalha took some time recently to talk about her work, about having a role model, then becoming one, and about watching her daughter follow in her footsteps.

How do you describe your present research?

I work on planet detection, characterization, and occurrence-rate studies. I’m also starting to turn my attention toward the broader subject of planetary habitability. With Kepler, we sought to find planets in the habitable zone (the range of orbits where liquid water can possibly exist on the surface). The long-term goal is to transition from finding habitable zone planets to finding habitable environments, and even living worlds.

Kepler was funded to do something very specific: determine the fraction of stars that harbor potentially habitable, terrestrial-size planets. That is what we mean by “occurrence rate”: how frequently planets of a given size and orbit occur in the galaxy. Kepler has delivered a statistically significant sample of new discoveries, thousands of planets that we can study as a population. We find that small planets are much more common than large planets in the inner regions of a planetary system. M stars (red dwarfs) seem to make terrestrial-sized planets more frequently than G-type stars (like our sun). We’re able to study these more general population-type questions because we have such a large sample of discoveries.

What else has Kepler taught us?

Kepler has demonstrated a diversity of exoplanets that we didn’t expect. For example, the most common planet known to humanity right now is one we don’t even have in our solar system: these super-Earth, sub-Neptune type planets. We don’t know anything about them. We don’t have any examples here at home.

We have found lava worlds with one hemisphere that’s an ocean – an ocean not of water but of molten rock. We have found disintegrating planets literally breaking up before our eyes, because of orbits close to the parent star. We have found circumbinary planets, planets that are orbiting not one, but two stars. We find planets as old as the galaxy itself; I think that was a huge surprise. It means that the raw materials for planet formation are available in the earliest stages of a galaxy’s life. We find planets associated with dead stars, orbiting white dwarfs. We also find interesting architectures: dynamically compact (planetary) systems, packed so tightly that planets feel gravitational interactions from one another.

What advice would you give a young woman seeking to enter a science or engineering field?

I always tell people just do what they love. I’m trying to remember what I told my own daughter (Natasha, now 27 and an astrophysics graduate student). There may be moments, especially in our field, which still suffers from gender imbalance, when you look around to find you’re different than most of the people sitting in the room. You’re going to have to work through that and stick it out. That’s an uncomfortable place to be. It’s going to cause you to doubt yourself. It’s important to pause and remember that you are capable and have something to offer. It is normal to find this work challenging. If you love it, persist.

One thing I’ve noticed over the years is that the students that tend to work with me on research projects are more frequently female. Not that I’m actively seeking them out; it just seems to be a natural thing that happens. To me, that highlights the need for role models. The lack of role models in the field is damaging. The expression is, “You can’t be what you can’t see.” The quickest way to close the gender gap is to provide role models.

In my undergraduate years, I never had any female professors teach my physics or astronomy classes. When I was in high school, though, I had the example of the astronaut Sally Ride. At that time, I didn’t know what I wanted to be. I went to college as a prospective business major, not a science major. When I paused and asked myself what I would do if I could do anything, the answer was to work for NASA. Immediately, that role model, Sally Ride, popped into my head.

With our own children, we were really careful (with both mom and dad working in astrophysics) not to make it astronomy 24/7 at home. In fourth grade, when our oldest daughter was 10 years old, she did a “famous American” report. She chose Sally Ride as the subject. She learned that Sally Ride was the first American woman in space and decided she wanted to be the first human on Mars. Now she’s really interested in the search for life on exoplanets. We’re sometimes even on (teleconferences) together, which is great fun.

It’s nice that Sally Ride influenced us both, and it makes me very happy to know that my own daughter will serve as a role model herself one day for future generations of explorers.