With no technical issues and a green weather board, the launch team is moving on schedule to a 5:33 p.m. EST liftoff.

With less than an hour until Antares’ scheduled 6:45 p.m. EDT liftoff, the countdown is progressing smoothly. There are no technical concerns with the rocket or spacecraft being worked. The weather for this evening’s launch is currently 100-percent favorable.

The launch of Orbital’s CRS-3 Commercial Resupply Services mission is the third commercial resupply flight by a Cygnus spacecraft to the International Space Station, and the first night launch of an Antares rocket. Cygnus will transport some 5,000 pounds of supplies and experiments to the orbiting laboratory. 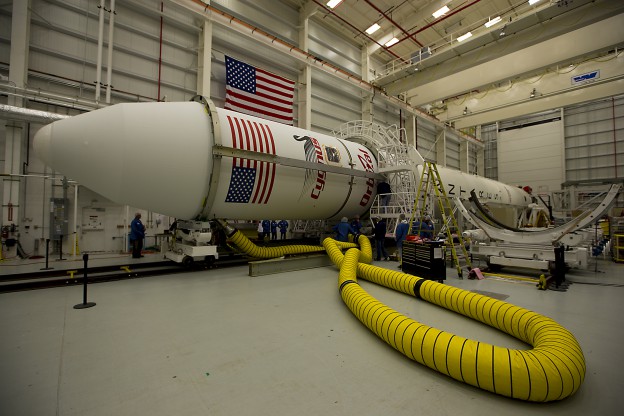 The Orbital CRS-3 mission’s payload fairing (essentially the casing around the spacecraft) was installed on Orbital Sciences Corp.’s Antares rocket the evening of Oct. 23 at the Horizontal Integration Facility at NASA’s Wallops Flight Facility in Virginia.

The rocket is scheduled to roll out to Mid-Atlantic Regaional Spaceport Pad 0A at Wallops late in the afternoon on Oct. 24 in preparation for launch Monday, Oct. 27, at 6:45 p.m. EDT.

This mission is the third of eight Orbital flights NASA contracted with the company to resupply the space station, and the fourth trip by a Cygnus spacecraft to the ISS. Cygnus will transport some 5,000 pounds of supplies and experiments to the orbiting laboratory.

On Monday evening a Cygnus spacecraft carrying 5,000 pounds of supplies, including science experiments, crew provisions, spare parts and experiment hardware is scheduled to launch aboard an Antares rocket from Virginia’s Eastern Shore, bound for the International Space Station.

The launch of Orbital Sciences Corp.’s CRS-3 Commercial Resupply Services mission is scheduled for no earlier than 6:45 p.m. EDT aboard an Antares rocket from the Mid-Atlantic Regional Spaceport at NASA’s Wallops Flight Facility.

The Antares rocket with Cyngus capsule aboard will be rolled out from Wallops’ Horizontal Integration Facility today en route to the MARS launch pad 0A, located about a mile away.

NASA Television will broadcast live coverage of the event, including pre- and post-launch briefings and arrival at the station. Launch coverage begins at 5:45 p.m. Monday. Coverage of capture and installation will begin at 3:30 a.m. Nov. 2, followed by grapple at 4:58 a.m. Coverage of the installation of Cygnus onto the International Space Station will begin at 7 a.m. The capsule is scheduled to depart the station Wednesday, Dec. 3, and burn up in Earth’s atmosphere during reentry.

This mission is the third of eight Orbital flights NASA contracted with the company to resupply the space station, and the fourth trip by a Cygnus spacecraft to the orbiting laboratory.