The Atlas family of rockets boasts a solid track record, and today’s launch will mark the 72nd for the Atlas V vehicle. The rocket standing on the pad at Space Launch Complex 41 is an Atlas V 401 configuration, used in more than half of the Atlas V launches to date. The 401 designation means this rocket has a 4-meter-wide payload fairing, no solid rocket boosters, and a single engine on its Centaur upper stage. 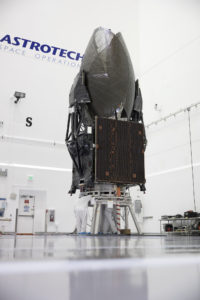 The first two satellites in the current TDRS series – TDRS-K and TDRS-L, launched in January 2013 and January 2014, respectively – both launched from the same launch complex on the same variant of the Atlas V.

The Atlas first-stage booster is powered by a dual-nozzle RD-180 engine, which ignites at T-0. Above the booster is the Centaur upper stage with its single RL10 engine. The two-piece payload fairing that protects the TDRS-M satellite tops the vehicle.

Built by Boeing at its factory in El Segundo, California, TDRS-M is the final in a series of three third-generation satellites to join the TDRS constellation. This generation will improve the system’s coverage flexibility as well as its ability to support more data and increased transmission rates.