Best wishes from Pasadena, California on this fine day!  As I write
the highly anticipated Enceladus flyby is underway.

I was in the office this weekend trying to get caught up a bit (a
weekend tradition), allowing me to hit the ground running on another
busy work week.  This week holds exciting promise and scientific
anticipation, though, in addition to my typical engineering duties.
Over the weekend, we did two Reaction Wheel Assembly (RWA) biases to
optimize the rotational speeds of these objects.  Through angular
momentum changes, these wheels can turn and point the spacecraft,
allowing incredible precision.  One of my tasks is to calculate how
much propellant these biases use, so that’s one thing I’m working on
today. 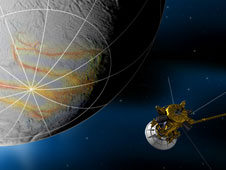 Speaking of propellant usage, there have been some questions about how
much propellant we will use in the maneuvers around Enceladus and for
the flyby itself.  As I mentioned in my prior blog entry, we were
actually able to cancel our approach maneuver, OTM-163.  In addition,
the next propulsive maneuver (OTM-164) is nearly two weeks off,
setting up Cassini for solar conjunction and yet another Enceladus
encounter (E5) in October.  OTM-164 will be rather large, however,
using roughly 10 kg of bipropellant, about 6 kg of nitrogen tetroxide
(oxidizer) and 4 kg of monomethylhydrazine (fuel).  For the E4
encounter itself, I don’t have a propellant-usage prediction handy,
but I can tell you it will be at most a few tens of grams of hydrazine
(the monopropellant fuel), for yet another RWA bias.

The bottom line is that we have plenty of propellant for our two-year
extended mission and beyond.  Thanks for that great question, and
we’ll see all of you on the other side of Enceladus!

One thought on “Flyby Underway!”