Good morning from sunny Southern California.  I have literally been up all night waiting to hear back from the Cassini spacecraft after its closest ever flyby of Enceladus.  It’s nights like this that I feel like a kid again waiting up for Santa on Christmas Eve.

As you know from all the other blog posts, last night we skimmed above the surface of Enceladus at an altitude of 82,000 feet (nearly 16 miles) while traveling at about 40,000 miles per hour…..and as if that wasn’t cool enough, we gave Cassini a “cosmic car wash” by flying the spacecraft through the plumes of the geysers on Enceladus. 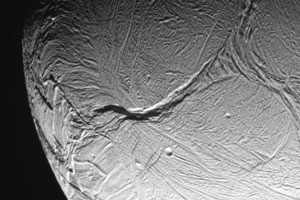 The challenge of navigating a spacecraft with the precision required for such a feat is two-fold.  Not only do my navigation teammates need to determine the orbit of the Cassini spacecraft (i.e., where it is and where it’s going), but there are other members of the navigation team trying to better figure out where Enceladus is (it’s one thing to know where you are….it’s something entirely different to know where your target is).  The experience from the other two Enceladus close encounters earlier this past March and August has improved our knowledge of this moon to such a degree that we feel confident that we can hit this tighter bullseye nearly a billion miles away from Earth.

Fans of extreme sports would especially appreciate what we accomplished.  I’ve bungee-cord dropped before and tonight’s flyby kinda reminded me of that.  This flyby 82,000 feet above the surface and through the plume of water ice is like bungee-cord jumping off a bridge and dipping your head into the river below before getting sprung back up.

As I’m anxiously waiting to receive a signal from the spacecraft, I’ve been spending my time surfing the web to see what the world has to say about us. One of the coolest aspects of working on such a historic mission as Cassini is reading stories on our work in the media.

As I’ve been typing this blog entry (and doing a little more net-surfing), I’ve been monitoring the real-time doppler signal, waiting for a call back home just to tell me everything is all-right.  AND THERE IT IS – YIPPEE!!!!!! and WHEEW!!!!! (wiping sweat off of brow).  This signal tells me in real-time, that Cassini successfully flew by Enceladus.  My friends will process this signal later this morning to tell us how well we hit our target.

And like that kid who just heard Santa land on his rooftop, I best be off to bed because I know when I wake up later this morning, I will have great gifts waiting for me in the form of spectacular images—I can hardly wait!!!!

I have pasted one raw image from the flyby here.To view all the latest images from before closest approach and as the spacecraft sped away from Enceladus, go to:

4 thoughts on “Xtreme Navigation,Not for the Faint of Heart”