Well, here we go again! Close on the heels of the first two exciting and successful targeted Enceladus flybys of the Cassini Equinox Mission, we have another Enceladus encounter this week!

Tomorrow is the third of three Enceladus flybys in a series … first the August flyby (referred to as E4 since it was the 4th targeted flyby of the entire mission), then on October 9 (E5) and on Friday, Oct. 31, we’ll do another flyby (E6). These three flybys comprise kind of a set, since they all have similar geometries: the spacecraft approaches Enceladus on an inclined trajectory over the northern hemisphere, closest approach is at a low latitude (near the equator), and then we pass through the plume over the southern hemisphere.  Shortly after closest approach, Enceladus enters eclipse behind Saturn and is in darkness for a couple of hours.

Having three flybys with similar geometry is really nice, because it allows us to perform different science experiments on each flyby, since we can’t do everything all in one flyby. It also lets us look for any temporal changes that could be happening at Enceladus, since it is such a dynamic body. E4 was geared toward remote sensing (especially imaging and CIRS) near closest approach, though the fields-and-particles instruments got good data too. E5 was designed for the fields-and-particles instruments, so that they could directly sense the plume as we flew through it. E6 is again designed primarily for remote sensing-and it has a bit more distant closest-approach altitude (200 kilometers or 120 miles), compared to E4 and E5, which approached Enceladus within 50 kilometers (30 miles) and 25 kilometers (16 miles), respectively. 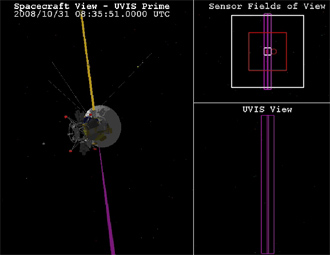 I’ll tell you about the science activities we’ll be doing during this flyby, and you can follow along by watching the accompanying movie (made as usual with grace and skill by Cassini navigator Brent Buffington). Click here for the movie. (At left, a still from the movie.)

Those of you who have been following along with the blog might be familiar with this flyby geometry, and you may also be familiar with this type of movie. For those of you who may be new to this, I’ll introduce the picture: the three panels show what the Cassini spacecraft is doing at each moment during the flyby. The left panel shows the spacecraft relative to the target body Enceladus, and shows which instrument is “prime” by highlighting the field-of-view of that instrument. The lower right shows the field-of-view of the prime instrument, and the upper right shows the fields-of-view of the remote sensing instruments (the cameras, UVIS, VIMS and CIRS), which are all co-aligned.

The movie starts about 8.5 hours before closest-approach, with a UVIS observation of Enceladus and its environment, performing measurements of neutral gases near the moon. That lasts for about 3.5 hours, and then VIMS is prime and stares at Enceladus to get compositional information as Enceladus gets closer and closer. CIRS then takes over (at 4 hours before closest-approach) and does a series of stares and scans with its FP1 (circular) and FP3 (small rectangular) slits, to get surface temperature measurements. Then VIMS performs a half-hour stare (closer to Enceladus this time). ISS takes over at 40 minutes before closest approach, and the spacecraft executes a large turn to put the cameras in position so that they can see the south polar region just as soon as Cassini gets to that location in the trajectory. Paul Helfenstein on the imaging team designed the “skeet shoot” sequence to image the south pole at the highest resolution possible (8.4 meters per pixel for this flyby)! The skeet shoot sequence starts just about two minutes after closest approach. (Closest approach is at 27 degrees south latitude, 97 degrees west longitude.) The imaging team will be able to study the south polar region to look for evidence of varying levels of geyser activity, by combining images from E6 and E4. The skeet shoot is followed by an eight-panel mosaic. Then ISS hands off to UVIS, to execute its closest, highest-resolution-ever scan of Enceladus to image the south pole and get compositional information on the tiger stripe region, as well as on the environment close to Enceladus (notice how the UVIS slit is long and how it extends past the limb of Enceladus). At 50 minutes after closest-approach, CIRS takes over, just as Enceladus is entering eclipse. Without solar illumination, it’s a perfect opportunity for CIRS to measure the thermal situation at Enceladus’ south pole, to determine what kind of heat is coming from the interior. CIRS executes a series of stares and scans with its different fields-of-view, to make these measurements. By the time CIRS is finished and Enceladus is out of eclipse, it’s about 4 hours after closest approach and Enceladus is getting farther away (it’s now smaller than a NAC). VIMS does another stare, this time of the southern hemisphere, and finally UVIS does a measurement analogous to the first one of the sequence, now of the southern hemisphere.

It should be really great — we’ll keep you posted on how things go!