This weekend, Cassini will embark on an exciting mission: trying to establish if Titan, Saturn’slargest moon, possesses a magnetic field of its own. This is important for understanding the moon’sinterior and geochemical evolution.

For Titan scientists, this is one of the most anticipatedflybys of the whole mission. We want to get as close to the surface with our magnetometer as possible fora one-of-a-kind scan of the moon. Magnetometer team scientists (including me) have a reputation forpushing the lower limits. In a world of infinite possibilities, we would have liked many flybys at 800kilometers. But we went back and forth a lot with the engineers, who have to ensure the safety of thespacecraft and fuel reserves. We agreed on one flyby at 880 kilometers (547 miles) and both sides werehappy. 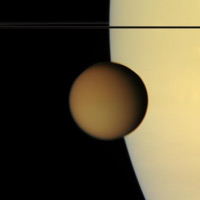 Flying at this low altitude will mark the firsttime Cassini will be below the moon’s ionosphere, a shell of electrons and other charged particles thatmake up the upper part of the atmosphere. As a result, the spacecraft will find itself in a region almostentirely shielded from Saturn’s magnetic field and will be able to detect any magnetic signatureoriginating from within Titan.

Titan orbits within the confines of the magnetic bubble aroundSaturn and is permanently exposed to the planet’s magnetic disturbances. Previous measurements by NASA’sVoyager spacecraft and Cassini at altitudes above 950 kilometers (590 miles) have shown that Titan doesnot possess an appreciable magnetic field capable of counterbalancing Saturn’s. However, this does notimply that Titan’s field is zero. We’d like to know what the internal field might be, no matter howsmall.

The internal structure of Titan can be probed remotely from its gravitational field or itsmagnetic properties. Planets with a magnetic field — like Titan’s parent Saturn or our Earth — arebelieved to generate their global-scale magnetic fields from a mechanism called a dynamo. Dynamo magneticfields are generated from currents in a molten core where charge-conducting materials such as metals areflowing around each other and also undergoing other stresses because of the planet’s rotation.

a) Titan’s interior still bears enough energy to sustain adynamo.
b) Titan’s interior is “cold” (and therefore has no dynamo), but its crust is magnetized in asimilar way as Mars’ crust. If this is the case, we should find out how this magnetization tookplace.
c) Something under the surface of Titan got charged temporarily by Saturn’s magnetic fieldbefore this Cassini flyby. While I said earlier that the ionosphere shields the Titan atmosphere fromSaturn’s magnetic bubble, the ionosphere is only an active shield when the moon is exposed to sunlight.During part of its orbit around the planet, Titan is in the dark and magnetic field lines from Saturn canreach the Titan surface. A temporary magnetic field can be created if there is a conducting layer, likean ocean, on or below the moon’s crust.

Once Cassini leaves Titan, the spacecraft will perform aseries of rolls to fine-calibrate its magnetometer in order to assess T70 measurements with the highestprecision. We’re looking forward to poring through the data coming down, especially after all thenegotiations we had to make for them!

César Bertucci, a space physicist working at the Instituto de Astronomía y Física del Espacio inBuenos Aires, Argentina, is a Titan expert on the Cassini magnetometer team. He is also a specialist inthe solar wind interaction with weakly magnetized bodies such as Mars, Venus and comets.

3 thoughts on “Cassini to Swing Low Into Titan's Atmosphere”