At NASA, acronyms abound. ICESCAPE, for example, is nothing less than “Impacts of Climate change on the Eco-Systems and Chemistry of the Arctic Pacific Environment.”

I’m finding a similar scheme at sea, having yesterday met VINDTA and AIRICA. Interestingly, however, some tools on board avoid the acronym game and are named instead for their inventor. Such is the case for the Van Veen grab.

It turns out that I spent the 2010 ICESCAPE campaign erroneously calling the tool the “Van Bean” grab. Correcting myself this year has had me wondering what … or who … is the real Van Veen? 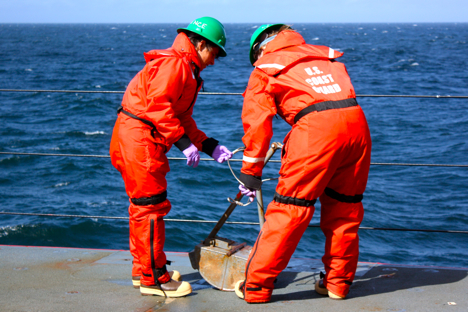 Van Veen is a clam-shell-like tool used to pull up sediments from the ocean floor. There are all sorts of creative ways retrieve seafloor sediments, from coring to scooping. The Van Veen grab, however, is simple and fast — perfect for the quick succession of sampling stations during ICESCAPE.

But who was Van Veen? A slow search online (our limited connection to the outside world) turned up “Ebb and Flood Channel Systems in the Netherlands Tidal Waters,” a paper from 1950 by Dutch engineer Johan Van Veen (1893 – 1959). The paper’s annotations imply that it was this engineer who invented, among other sampling tools, the early version of the sampling device we’re using on our cruise.

What does Van Veen do for ICESCAPE? Sampling the bottom dwelling communities, the sediment chlorophyll and organic carbon, adds important context for understanding the Arctic ecosystem as a whole.

Karen Frey, of Clark University, is on the Healy collecting samples with the Van Veen grab (above). Frey works with Lee Cooper and Jacqueline Grebmeier, of the University of Maryland Center for Environmental Science. Grebmeier has been working in the Arctic for nearly 30 years, building up quite a long record of sediment data in Arctic regions. Check out their work here.