Sailors of the past century, or even decade, might scratch their heads in wonder if they could have seen us on June 25 pulling away from Dutch Harbor on the Healy. Half-noticing the final sightings of land, we clung to cell phones for a bittersweet last call to loved ones.

From our personal laptops, we can send and receive e-mail files under 3 MB. Any message below 200 K is automatically routed through a system called reachback. The system uses four SIM cards and, just like a cell phone, calls up SIM cards on shore to communicate the information. Reachback is practical, but not functional for much other than e-mail.

“I’m so much more productive out here without Internet all of the time,” said a scientist who asked to remain anonymous.

Internet is available, however, at series of shared desktop computers connected by a satellite system called VSAT. 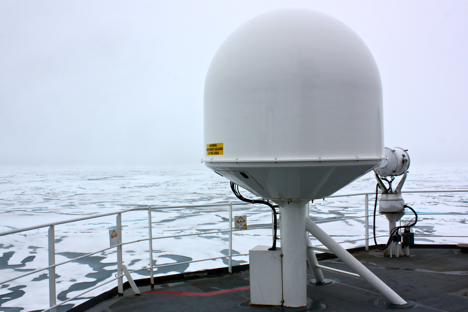 Dome-shaped antenna structures on the Healy receive signal from satellites to provide an Internet while cruising in the Arctic Ocean. Credit: NASA/Kathryn Hansen

How does VSAT work? Two massive dome-shaped antenna structures sit on top of the port and starboard sides of the Healy, in sight (usually) of at least one of two satellites. Control units on the ship’s bridge are used to switch between the antennas depending on which receives the better signal. With two antennas, two antenna control units, and two modems, the system is redundant and reliable.

Problems can arise, however, when the ship sails further north. Right now, we’re picking up satellite signal that’s just 7 feet above the horizon. Sail much further north and the Earth’s curvature will soon put that signal below the ocean. 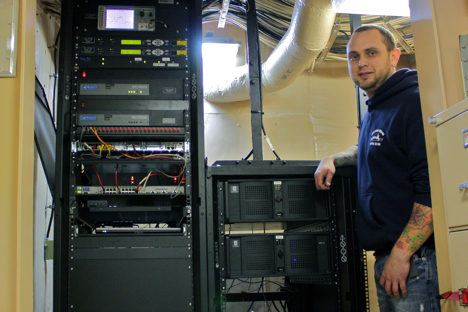 Donny Graham stands next to the VSAT control units on the bridge of the Healy. Credit: NASA/Kathryn Hansen

“We’re not going to lose VSAT on this cruise, but on other cruises we start to lose it at a latitude of about 76 degrees N, and definitely by 78 degrees N,” said Donny Graham, a network technician for Coast Guard ships and currently on the Healy.

Graham also keeps watch over the bandwidth, which is metered (right) to ensure uninterrupted operation.

The bandwidth is 256 Kbit per second with up to 512 Kbit bursts. Most 3G smart phones have a faster bandwidth speed on paper, according to Graham.

“But since we manage what goes out over the Internet here, the Web surfing experience is much better then it use to be,” Graham said.

Still, the connectivity has its limitations. Computers on board refused to shake hands with the NASA chat client on shore. Instead, on July 11 at 1 p.m. EDT, experts on the ship will be answering questions via twitter from @NASA_ICE. Tweet your question about the mission at any time with hashtag #ICESCAPE.

5 thoughts on “Tech Tuesday: Communicating From the Arctic”