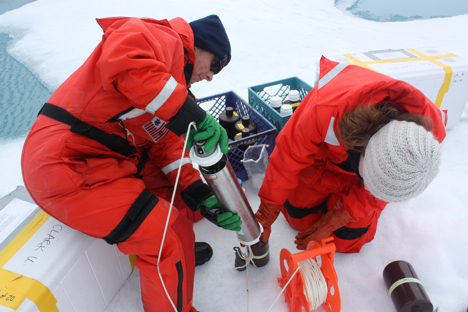 ICESCAPE scientists are well acquainted with water. They sample water over the starboard side of the Healy, over the bow of a small deployable boat, and through holes in the ice. They sample at the ice-ocean interface and at depth, and the water from melted ice cores.

The sound you hear is the water sampler cast through a hole in the sea ice. At ice stations, Christie Wood and Holly Kelly lower a canister on a rope to a specific depth, pre-measured and marked on the rope. The initial splash is the sound of a slug traveling down the rope and into the water. Ultimately the slug contacts the canister and triggers it to shut, locking water inside. Scientists reel in the canister and empty its contents into bottles for transport back to the Healy’s lab.

Typically that would be the end of the splashes. On July 10, however, a bent cylinder prevented the canister from shutting. Upon reaching the surface, the cylinder emptied its contents on the scientists’ feet. Undeterred, the team finished the job with the second, more functional canister.

The sampler collects water at the interface, where ice meets water, followed by samples at 1 meter, 5 meters, 10 meters, 20 meters and 30 meters deep. The entire process of about 30-35 casts takes at least 2.5 hours.

Back in the lab the team looks for colored dissolved organic matter, dissolved organic carbon, salinity, suspended particulate matter, nutrients and chlorophyll. Other groups look for measures such as alkalinity, or take a look under the microscope.

Compared to water samples pulled from the side of the Healy, the on-ice sampler can resolve much finer-scale structure, not possible from a ship, particularly at the ice-ocean interface where the water column is most influenced by melting ice. 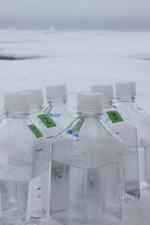