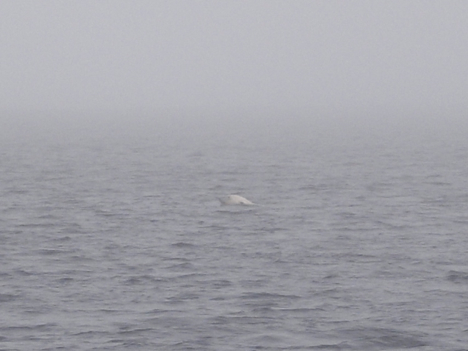 On July 17, U.S. Coast Guard crew and scientists powered away from the Healy on the ship’s deployable Arctic Survey Boat for a few hours of routine optical measurements. U.S. Coast Guard SNBM John Jozwik maneuvered through the murky fog hovering over the Arctic Ocean and steered to avoid a block of ice bobbing on ocean’s surface, not an uncommon sight in the Beaufort Sea. Just 20-30 meters from the object, crew and scientists on board realized that the “ice” was not ice at all.

The close up, eye-level look with the polar bear was a reminder that we are visitors working in their territory, and to always keep a watchful eye on our surroundings. Jozwik quickly pointed the boat elsewhere and the science team finished sampling away from the curious bear. Credit: Scott Freeman/NASA GSFC 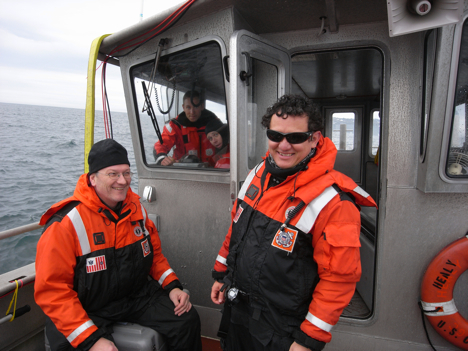 Joaquin Chaves (right) and Scott Freeman (left), of NASA Goddard, work on the Arctic Survey Boat during the ICESCAPE’s 2011 campaign.

Why do scientists bother to leave the Healy for a smaller boat in the first place? It turns out the Healy — a massive, colorful ship — can influence the precise optical measurements that some ICESCAPE science teams want to collect.

Shipboard instruments are bulkier and collect data down to greater depths, sometimes down to thousands of meters, so the ship’s shadow and turbulence poses less concern. To see what’s happening in the water column close to the surface, down to just 35 meters, a science team from NASA’s Goddard Space Flight Center heads out in the Arctic Survey Boat (ASB) to undisturbed water.

The ocean’s top layer is observed by satellites that measure ocean color and tell us how much chlorophyll, a proxy for phytoplankton, is present. The Arctic, however, is a tricky place to observe. The water’s optics are influenced by unique solar geometry. Components other than chlorophyll, such as coastal sediments and sea-ice meltwater, can influence how light is scattered or absorbed. To tease out the signal from chlorophyll alone and improve the utility of satellite observations, the ground-based work is key.

So far, the team says they have been surprised by the clarity of the water just beyond the continental shelf. We are sampling later in the season this year, and the bloom that follows the sea ice’s retreat likely occurred more than a few weeks ago.

One thought on “Image of the Week: Small Boat and a Big Bear”