What qualifies as a challenge for a society evolves as the society evolves. The frontier has moved beyond the west, beyond the surface of the Earth, and beyond the Moon. Our frontier is at Mars. What took Roald Amundsen a lifetime of effort can be replicated in a matter of days now. What took Lewis and Clark more than 2 years can be accomplished in a matter of hours. These things are easy today, they are not a challenge, and they do not inspire. It will not be easy to traverse the expanse of space and land on an entirely new planet, but exploration is not about doing what is easy.

On May 25, 1961, when Kennedy first said, “I believe that this nation should commit itself to achieving the goal, before this decade is out, of landing a man on the moon and returning him safely to the Earth,” humanity was only taking its first steps into the frontier of space. Only two people had left the Earth for a cumulative time in space of just over two hours, and yet Kennedy and a nascent NASA proclaimed that America could put an astronaut on the Moon. Fast-forward to today, humanity has spent more than 50,000 days in space, launched thousands of rockets and hundreds of astronauts, developed supercomputers millions of times more powerful than those of 1961, and visited every major body in our solar system. Mars may be 200 times farther than the Moon at closest approach, but we may be thousands of times more prepared to achieve this.

Mars is a destination that compels and inspires. To quote a recent college student and an aspiring Mars explorer, “The first person to walk on the moon didn’t happen in my life time but I would love to be a part of the first humans on Mars.” This energy will propel humanity beyond the confines of the Earth and out into the Solar System. From the Mercury Program to the Curiosity rover, we have been preparing to send humans to Mars for 60 years.

The following table underscores how much our capabilities have grown since 1961: 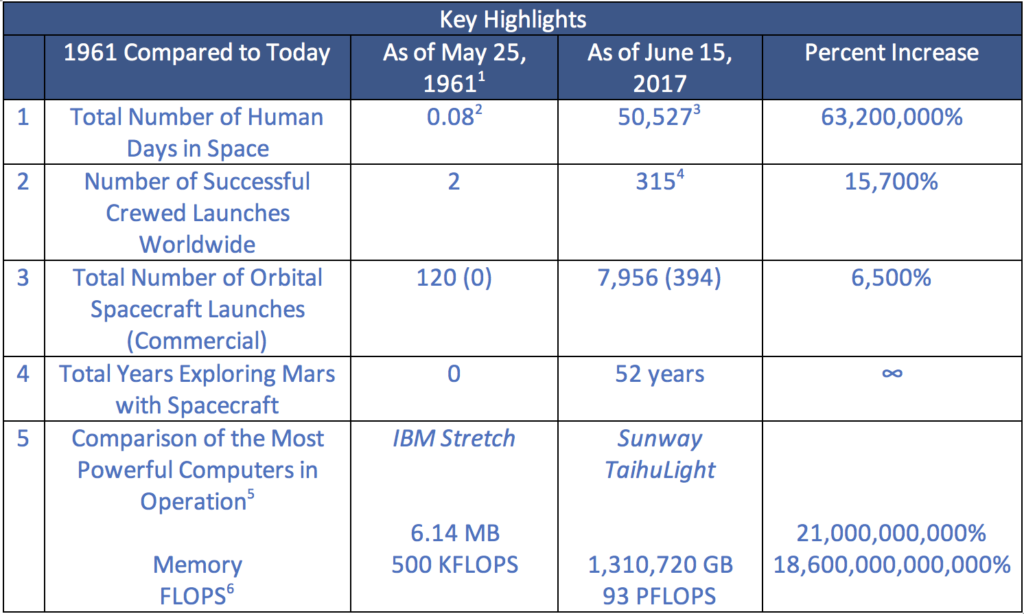 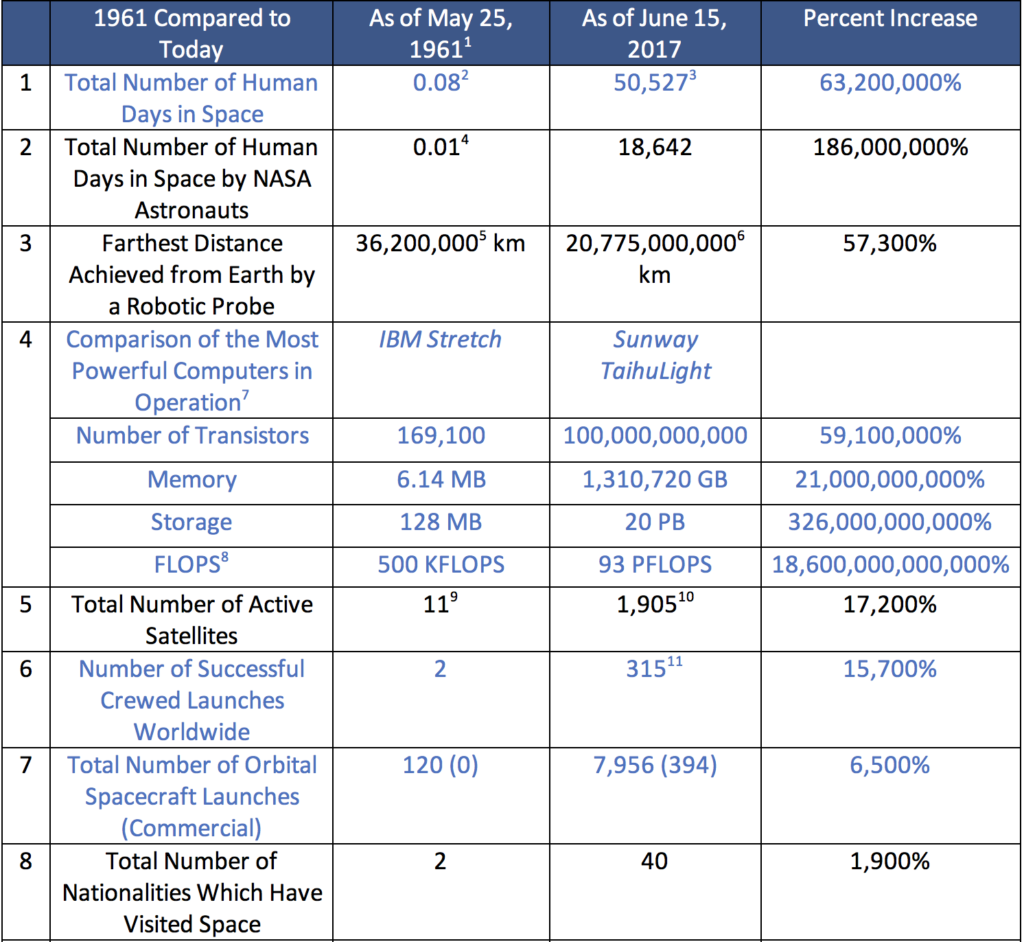 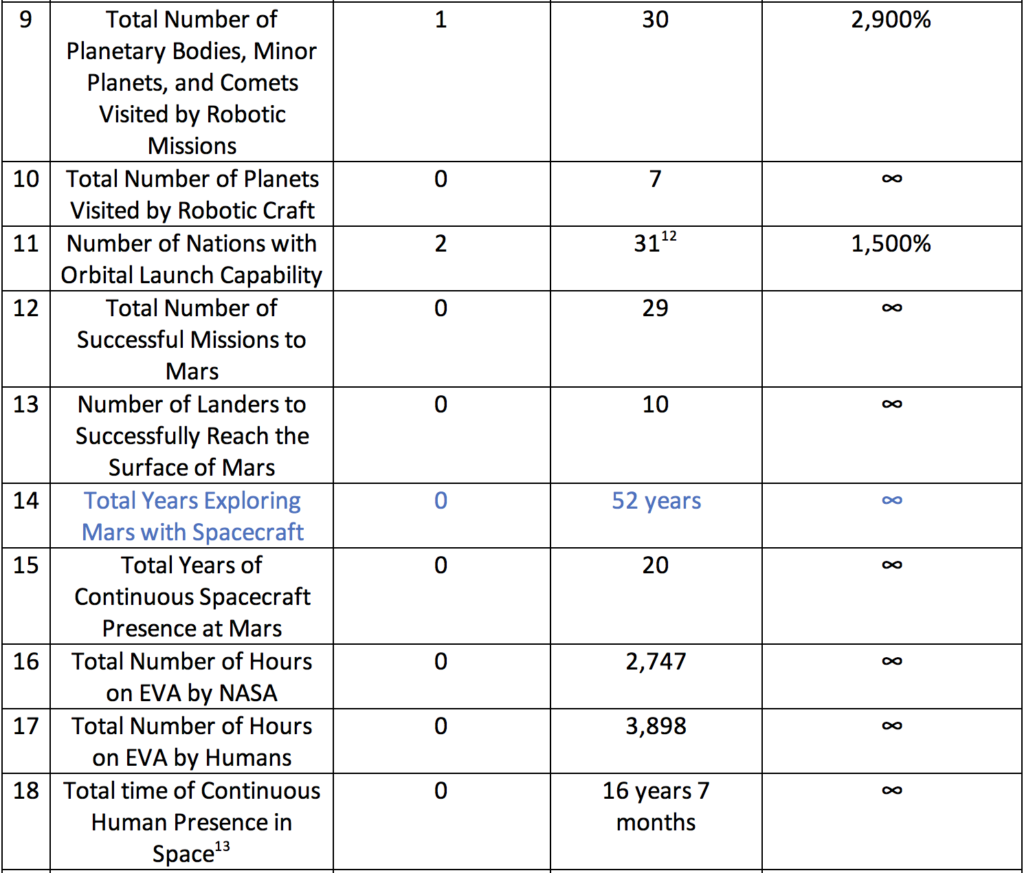 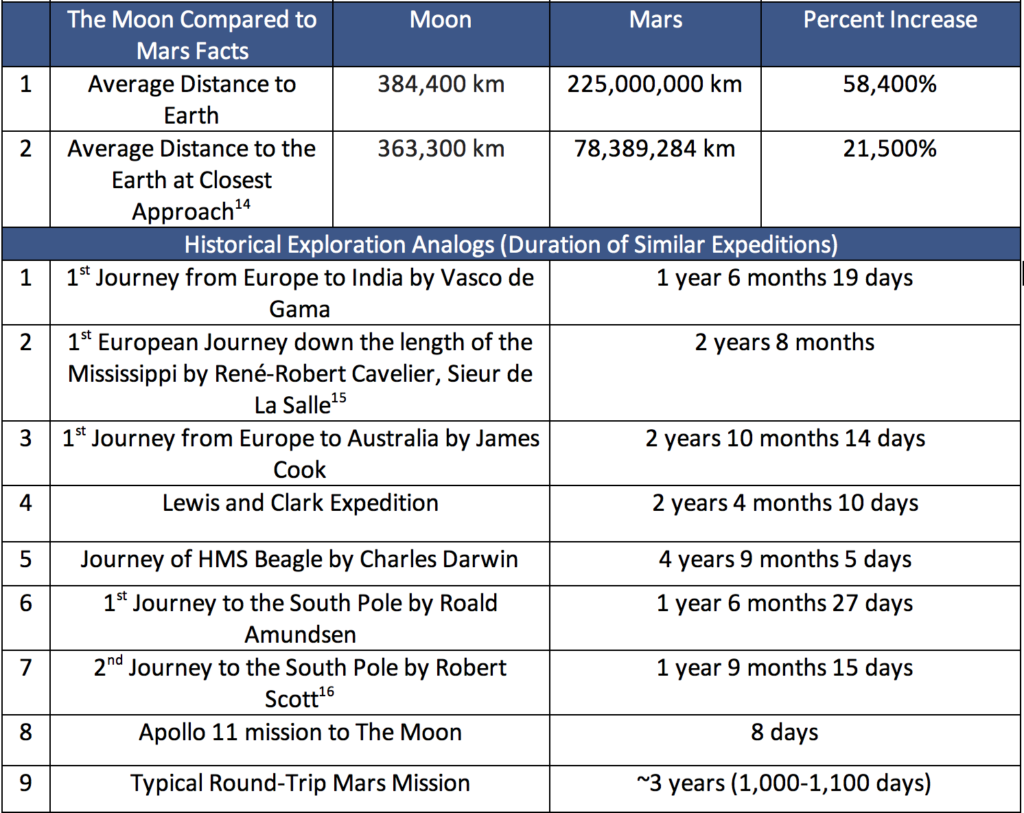 [1] The date of JFK’s speech before a joint session of Congress in which he committed the nation to landing a person on the Moon
[2] Includes Yuri Gagarin and Alan Shepard’s flights
[3] Compiled from astronaut, cosmonaut, taikonaut, and space tourist biographies
[4] Alan Shepard’s May 5, 1961 Mercury-Redstone 3 flight
[5] Achieved by Pioneer V on June 26, 1960
[6] Achieved by Voyager 1 as of August 4, 2017
[7] From the historians at the Museum of Computer History
[8] Floating Point Operations Per Second
[9] Includes Vanguard 1, Vanguard 2, Explorer 7, Transit 2A, Solrad 1, Echo 1, Explorer 9, Discoverer 20, Discoverer 21, Discoverer 23, and Explorer 11
[10] Includes active solar system probes. Taken from: http://celestrak.com/satcat/boxscore.asp
[11] Includes Russian, US, and Chinese crewed launches
[12] Includes ESA member nations
[13] Starting on Oct. 31 2000 with ISS expedition 1
[14] Average perigee for Moon and Mars from: https://nssdc.gsfc.nasa.gov/planetary/factsheet/moonfact.html and the calculations of Ryan Woolley
[15] His journey from Ft Niagara to the mouth of the Mississippi that claimed much of what became the Louisiana Purchase
[16] Crew Perished on return journey
[17] Adjusted for inflation to 2016 dollars
[18] Adjusted for inflation to 2016 dollars