The answer is yes if you consider that three NASA astronauts are practicing future off-planet spacewalks undersea this week off the Florida coast.

The three astronauts, joined by a Constellation Program engineer and a team of diving “buddies,” are performing engineering evaluations for next spring’s NEEMO 14 mission.

The NASA Extreme Environment Mission Operations 14 (NEEMO 14) was slipped from October to allow the National Oceanic and Atmospheric Administration (NOAA) to complete a safety review of its Aquarius underwater laboratory.

Aquarius, located three miles off Key Largo in the Florida Keys National Marine Sanctuary, is the world’s only permanent underwater habitat and laboratory

The team of NASA divers and astronauts spent last week doing preliminary work at a Key Largo, Fla., base.  This week the team will perform some engineering evaluations on a low-fidelity, full scale mock-up of the Altair lunar lander positioned next to NOAA’s lab.

The engineering tests include 1/6 g operational evaluations of unloading a mock-up of the Lunar Electric Rover off the lander platform, rover hatch size evaluations, and incapacitated crew rescue operations.

The rover and lander mockups rival the size of the vehicles NASA is designing for future planetary exploration. The lander mockup is wider than a school bus is long and almost three times as high, measuring 45 feet wide and 28 feet high, including a six-foot high crane. The rover mockup is slightly larger than a full-size SUV, standing eight feet tall and 14 feet long.

Boe completed his first space flight as pilot on STS-126 in November 2008 and is assigned to pilot the STS-133 mission targeted for September 2010. Gernhardt is a veteran of four space shuttle flights, four spacewalks and two NEEMO missions. Arnold completed two spacewalks during his first spaceflight, the STS-119 mission in March and he was part of the NEEMO 13 mission in August 2007.

Andrew Abercromby serves as the deputy project manager and a biomedical engineer for the Lunar Electric Rover project and deputy lead for the Exploration Analogs and Mission Development project. As part of the Human Research Program, he is a project engineer for the Extravehicular Activity Physiology, Systems and Performance project for Wyle Integrated Science and Engineering Group in Houston.  He has extensive experience in planning and executing field test operations including NEEMO and NASA’s Haughton Mars Project, Desert RATS, and the Pavilion Lake Research Project.

NEEMO missions are a cooperative project among NASA, NOAA and University of North Carolina at Wilmington the university. 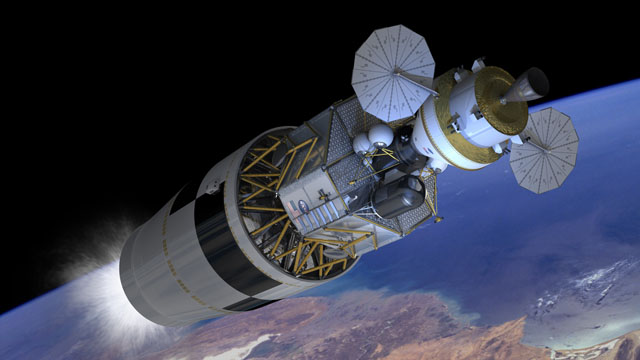 Constellation has its eyes on the Lunar Reconnaissance Orbiter and is anticipating some great images. The spacecraft entered lunar orbit on the morning of June 23 and after that orbit is refined engineers will power up and calibrate LRO’s instruments. In a couple months, LRO will begin mapping the lunar surface to find future landing sites and searching for resources that would make possible a permanent human presence on the moon.

While the Apollo missions demonstrated that that it was possible to send humans to the moon, they did so for very short times – only three days, and at great risks. The LRO mission is paving the way for extended human habitation on the lunar surface and striving to reduce the risks to the astronauts travelling there.

LRO’s very high resolution cameras and laser altimeter will examine more than 50 potential landing and outpost sites on the lunar surface in enough detail to resolve an object the size of a beach ball. This will provide information to engineers currently designing the Altair lunar lander and allow them to build safe and effective landing systems, and will give mission planners the information they need to select safe landing sites.

Plus, the logistics resupply of a lunar outpost will be a challenge far exceeding that of the International Space Station. It will be necessary for lunar astronauts to learn to “live off the land” by utilizing the resources available on the moon. These may include water in permanently shadowed regions of the lunar poles, which could be invaluable for both consumables for the astronauts and propellant for their spacecraft. LRO instruments will map these regions of shadow and determine whether and where these resources are located. In addition, LRO will map the resources of the entire moon’s surface looking for deposits of other valuable resources, such as oxygen, locked in the lunar soil.

The availability of energy also will be the determining factor on how effective humans will be in accomplishing lunar science and exploration objectives. Because the moon’s axis is not tilted like the Earth’s, there are regions of the lunar poles that receive almost continuous sunlight, rather than the 28-day cycle of light and dark found in most regions. This will allow solar power systems to provide electricity to a lunar outpost with much greater efficiency. The LRO cameras will accurately determine these regions of perpetual sunlight by observing them over an entire year.

One of the comments we received on the Altair video asked about possible sleeping arrangements for the astronauts. Well, we are exploring various configurations for crew sleeping accommodations. One option is certainly fold-down beds. Currently, we are experimenting with a hammock concept for Altair, in which a fabric hammock is supported by two poles, which attach to the forward walls of the cabin.  In this scenario, we would deploy four such hammocks vertically, similar to how crew sleep stations are arranged on many naval vessels.  When not in use, the poles would be stowed flush with the cabin walls and the hammocks would be folded up and stowed in lockers.  This arrangement worked well in recent evaluations and allowed our test subjects to “sleep” without disturbing each other, and it allowed any crew member to get up in the middle of the night (e.g., to get a snack, complete a task) without causing the others to have to move their sleep stations out of the way.  We will continue to explore additional concepts in the future as we search for the ideal solution to incorporate into the Altair.  It will be interesting to see what kind of sleeping accommodations eventually fly.

Here’s a look at some of the testing being done on the sleep stations inside one of the Altair mock-ups.

One of the things we get a lot of questions about is what the inside of the Altair lunar lander will look like. Well, initial concept work is already underway, and the NASA team is busy exploring Altair’s design. While the details of what the crew cabin will look like are still being figured out, what is known is that Altair will carry four astronauts to the lunar surface and will serve as their home for up to a week.

Altair is big. One current concept is that it will stand more than 30 feet high and will be almost 45 feet wide at the footpads. There are mock-ups already built at the Johnson Space Center in Houston where habitability teams are working inside, trying out different configurations. These teams are taking a look at how astronauts will live and work inside, so that Altair can be built in the best way possible for the mission.

Click on the link below and take a quick spin around the inside of Altair. It’s a concept — and NASA is exploring others — but as you can see, it will be very different from anything we’ve designed before.

Click here to view the video in RealPlayer format 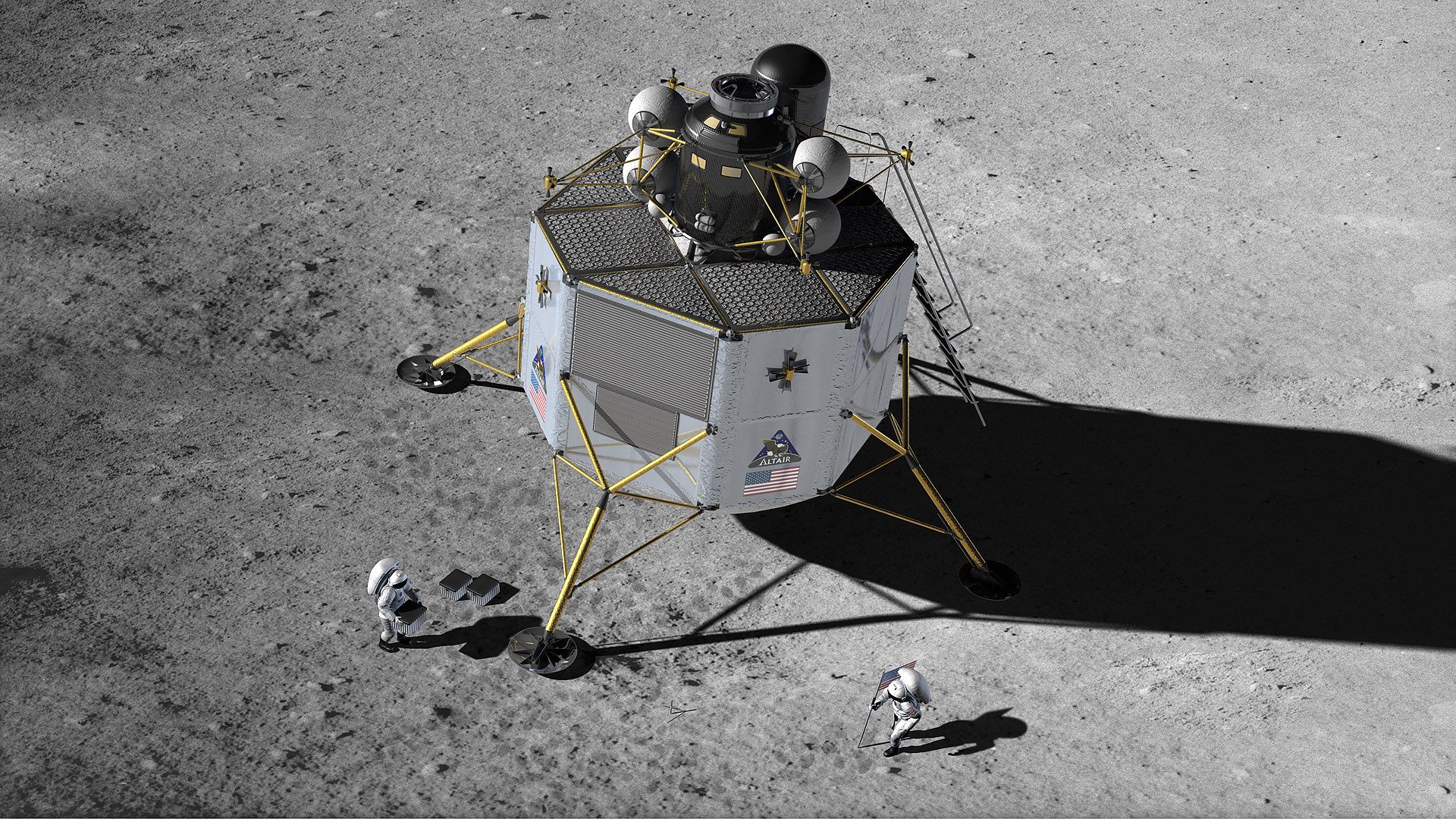