Greetings from the engineering side of the Cassini mission to Saturn on this auspicious date, 8/8/08!  As most folks on the third rock from the Sun turn their attention toward and the Summer Olympics, Cassini scientists and engineers at JPL are turning their gaze skyward for some Winter Olympics of our own at Enceladus.  As Amanda so eloquently posted in her blog entry, this is truly an exciting time for the mission.  We are a mere three days away from a daring pass near Enceldaus’ tumultuous south pole, peppered with fractures called “tiger stripes” and active ice volcanism!  Though we’ve been to Enceladus a few times before, every encounter is a new adventure, allowing each science instrument its time to shine. 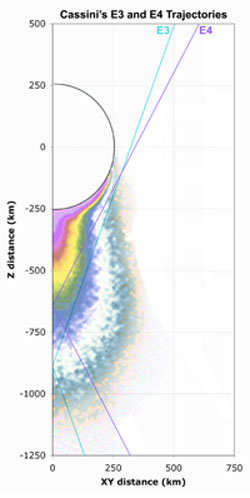 Before any science results may be achieved, though, we have to make sure the spacecraft is on course for a truly close approach to Enceladus.  Next Monday, Cassini will zip over this icy orb within 50 kilometers (30 miles), a close shave indeed considering Enceladus is roughly 1.5 billion kilometers (900 million miles) from Earth.  From the spacecraft engineering and navigation teams, I’m happy to report our final E4 flyby approach maneuver, OTM-163, was canceled yesterday afternoon.  These cancellation-decision meetings are always very interesting, representing a wonderful example of the collaborative efforts required of our scientists and engineers.  It turns out we could have performed OTM-163 today (i.e., it was large enough to execute), and we know where the spacecraft is very precisely.  The “tall tent pole” in the process turned out to be our uncertainties in the position of Enceladus itself, rendering the tiny maneuver superfluous!  Naturally, our understanding of Enceladus’ position will improve after Monday’s close flyby, but I thought it was quite interesting that we know where our (relatively) small spacecraft is better than we know the position of this moon of Saturn.  Among countless scientific reasons, this is another incentive for close flybys of moons like icy Enceladus.

Perhaps I could have predicted this maneuver would get canceled, given its cushy positioning on a regular working Friday, during prime shift.  Why aren’t the off-shift, holiday, and weekend maneuvers afforded the same cancellation probability, statistically?   I’m sure this perception of mine is incorrect, but no matter, because the important point is we’re on course for Enceladus.  Our engineering and navigation teams are happy and excited, and scientists are about to enjoy another thrilling encounter with this most perplexing of Saturn’s moons.

2 thoughts on “Cassini Engineering Is Ready for Enceladus!”