Cassini Scientist on the Visual and Infrared Mapping Spectrometer

What a way to start Cassini’s extended mission! On Tuesday afternoon (Aug. 12, 2008) about 50 scientists sat in the Spaceflight Operations Facility at JPL to view the images as they came down.

I was as dumbfounded as anyone, but rapt in awe to be among a privileged group of humans to see another part of nature for the first time.  How fantastic that the public can share in this excitement through the raw image gallery .  Those few sublime moments were worth the many months of drudgery that went into planning these observations. Some of the views were of old familiar terrains, roads that we traveled many times. But many of the features revealed were new, and seeing them evoked the same level of astonishment I experienced at my first sight of the Grand Canyon or . 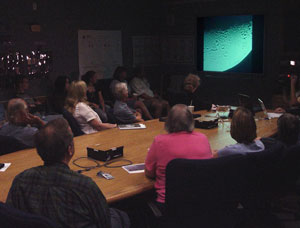 Image left: That’s me to the lower left of the image screen. My colleagues and I gathered to look at these raw images from Enceladus.

Inspiring as that first peek at new data was, I am now confronted with Thomas Edison’s cogent remark about the nature of discovery: it’s one percent inspiration and 90 percent perspiration. Much of the most important discoveries to come from this flyby will be squeezed out of the data over the coming days and weeks: teams of scientists poring over the measurements, analyzing, massaging, modeling, thinking, going up blind alleys – that is just the nature of research. It is also very much a team approach, with each member contributing from an area in which they are expert.

Jerry Jones, who heads the Cassini Navigation Team, told the assembled scientists yesterday that we came within one kilometer of our planned trajectory. Instead of a close approach of 50 km (30 miles), we came within 49 km of the surface of Enceladus. That Navigation Team is awesome! Imaging scientist Paul Helfenstein built a clever sequence at closest approach that was designed to place observations right on the hot tiger stripes, and which he nicknamed the “skeet shoot” (explained in Amanda’s first post).  The skeet shoot that was successfully executed on August 11 was equivalent to the clay pigeon being thrown into the air in , and the bullet being fired from .  Good going, Paul.

How fortunate we are to have the spacecraft alive and well, with all systems and scientific instruments operating. What we saw at Enceladus represents just a small part of what we will learn over the coming years. There are six more targeted flybys of Enceladus coming up over the two years of the extended mission. There is still so much to learn about the ringed planet and its family of moons.

2 thoughts on “Seeing The Images For The Very First Time”