Well as luck would have it, much of my day yesterday was spent on an airplane flying to for a non-Cassini-related meeting Wednesday and Thursday. I knew the data would be coming in while I was in the air and was excited to check it all out once I landed.  For most flybys, I am in front of my computer, watching the data come in real-time.  So I’m on the flight, and I’m working on some UVIS (Ultraviolet Imaging Spectrograph) Enceladus data from a past flyby that I think will be interesting to compare with the data from Monday’s flyby, and I’m gearing up for the new UVIS data, listening to my iPod (Sigur Ros, which is always nice n’ mellow for a flight) and I hear my name being shouted (above the music) and I look up and it’s Bob Pappalardo, who is sitting one row up across the aisle. He’s the Cassini Project Scientist for the Extended Mission and has been a colleague and good friend of mine for several years. I take out my ear buds and Bob is shouting at me that, just prior to taking off, he received an email from Carolyn Porco (Imaging Team Lead and fellow blogger) that she’d seen the first of the closest-approach images and her reaction was (an informal version of) “Golly!” That got me all excited and I took my laptop over to his row of seats and we checked out the playback table again to review which images were hitting the ground when. I told Bob, “The second we land you must fire up your remote internet access thing so we can get at those images!!” 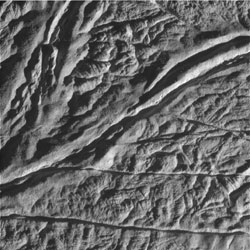 Image left: Here’s an example of a raw image from Enceladus. Click here for the full image

Went back to my seat, experiencing the first waves of absolute thrill that I always get during these flybys, and happiness because I am so lucky to do this for a living! What fun.  I switched to something more upbeat than Sigur Ros … I’m thinking old school Oingo Boingo or maybe some MGMT. I’m excited to see these data!

And now it’s Wednesday morning and we’ve all seen the fabulous images. All the excitement was well-founded. Golly, indeed! I’m having fun digging through the UVIS data and we’ll see what they reveal about the south polar region. What an interesting, fascinating little world. What a surprising bit of insight into solar system processes! Thanks to Paul Helfenstein and the Imaging Team for their hard work on the closest-approach “skeet shoot” and mosaic, and to the entire Cassini spacecraft team for their diligence in making this flyby work so incredibly well!

One thought on “The Perspective From an Airplane”