Cassini’s next white-knuckle Enceladus flyby is quickly approaching, and the excitement is building for those of us working on the Cassini Plasma Spectrometer, CAPS. This instrument team is headed by Dave Young at the Southwest Research Institute, San Antonio, but the team members work in several countries. This includes the UK, where several of us on CAPS work at the Mullard Space Science Laboratory—part of University College London that’s located in the countryside to the south of the city.

CAPS is part of Cassini’s suite of magnetospheric and plasma science, or MAPS experiments. With these, the spacecraft can sense its immediate environment: the gases, plasma, electromagnetic fields, and dust that can tell us a huge amount about the Saturn system. 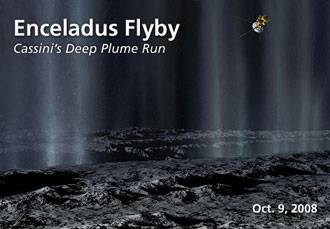 The results from each of this year’s Enceladus flybys has a different flavor. The main reason for this is that not all instruments can be pointed in their respective “best” directions at once, and the flybys are so brief that there’s no time to turn Cassini, so every instrument gets a good look or samples the particles they want to… it’s a bit like deciding who gets the window and aisle seats! Luckily, because we’ve got several flybys, the teams can take it in turns to get the best data out of their respective experiments… this time, as it was back on March 12th, the MAPS instrument teams are in their favorite seats.

So what are the CAPS team going to be looking at during this daring dive? Enceladus is sitting in a flow of plasma—a mix of ions and electrons that’s trapped around Saturn by the planet’s magnetic field.  We expect Cassini to briefly enter a wake where this magnetospheric plasma can’t penetrate, a “shadowed” region where CAPS should sense a big drop in the density of the plasma. Once past closest approach, only 25 kilometers, or 15.5 miles, from Enceladus’ surface, Cassini will spend a few minutes actually inside the plume of gas and ice particles being thrown out by the moon.

CAPS will be pointed in the right direction to scoop up this material at almost 18 kilometers. or 11 miles a second. as we whiz through the plume.  Some of the gases released in the plume are electrically-charged by the time they reach Cassini; CAPS can measure the energies of these and how many are present. From this, we should be able to learn a lot about the plume: how dense it is, its composition, and how this plume affects the plasma flowing past it. This approach worked really well during the March encounter, so we’re hoping to repeat that success, but taking a different “cut” through the plume because Cassini will fly past Enceladus from a different direction.

We’re strapped in, noses against the window, and can’t wait for the ride!

2 thoughts on “Strapping in for the Ride”