Hi everybody! I’m very excited about today’s Enceladus flyby, which will take us deeper into the plume than we’ve ever been before! Here’s the scoop on the science activities that will take place during the encounter, accompanied by a neat movie provided by Cassini navigator Brent Buffington. Click here to see the movie (30Mb).

We’ve posted these types of movies for previous flybys, but in case you haven’t seen one before, here’s the setup: the left-hand panel shows the spacecraft and its relationship to Enceladus and will indicate the view of the “prime” instrument by showing its viewing frustum in the color corresponding to that instrument. The upper right panel shows the fields-of-view of the remote sensing instruments (i.e. the cameras and the imaging spectrometers), and the lower right panel shows the “active” field-of-view, since at any time, one instrument is “prime” (though other instruments may be simultaneously taking data, while “riding along”). (By the way, you can go to the end of this post for a key to help watch the animation.) 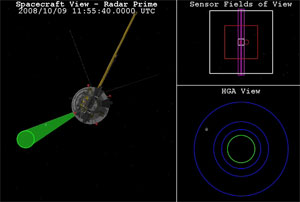 Now, this flyby has a similar trajectory to the previous two flybys in March and August: a fast, inclined path coming in over the northern hemisphere and leaving over the southern hemisphere, with closest approach at a low latitude. Recall that summer in the southern hemisphere is winding down, meaning that the active “tiger stripe” region is illuminated by the sun less and less every day. CIRS and RADAR can see in the dark and don’t care too much about solar illumination, but ISS, UVIS and VIMS usually measure solar light reflected from the surface—so opportunities to measure the wild south pole using these methods are dwindling!

OK, so the movie starts while we’re inbound to Enceladus, about eight hours before closest approach, when RADAR makes measurements to get at centimeter-scale roughness and to investigate the energy balance in the upper layers of the surface – so you can see the green circle doing repeated scans over Enceladus. The scans are accomplished by slewing the entire spacecraft.

Then the spacecraft turns 90 degrees so that the remote sensing instruments can point at Enceladus. First CIRS is prime and does a series of stares and scans. CIRS measures the temperature of the surface. Fellow blogger John Spencer will probably tell you later more about CIRS measurements, which are super important and interesting at Enceladus.

After CIRS, we’re about two hours from closest approach, and UVIS is prime, starting from several radii away from the body and slowing scanning onto Enceladus, to map out any neutral gases, such as oxygen or hydrogen, that are present in the vicinity.

When UVIS is finished with the slow scan, the spacecraft executes a big turn to put the fields-and-particles instruments (especially CDA and INMS) into position to “scoop up” dust particles and gas species during closest approach and while in the plume. Such a close approach and relatively deep plume passage are going to provide really interesting and key results on plume composition and also the composition of material sputtered from the surface away from the plume. (Note that during the closest approach period, the remote sensing instrument boresights are actually on the planet – see the upper right panel – though they’re not taking data.)

Closest approach goes by quickly (we whiz by at nearly 40,000 mph!), and about 15 minutes after closest approach, the spacecraft turns so that the remote sensing instruments can check out the south pole. ISS is prime first, for about 30 minutes, to image the active tiger stripes while Enceladus is in sunlight. Then CIRS takes over, and at around 19:52, Enceladus will enter eclipse, and will be in eclipse for about 2.5 hours, so CIRS will be able to map south polar surface temperatures without the influence of solar input.

Finally the Enceladus sequence ends with a distant view of the body with UVIS as prime instrument!  That’s the instrument I work on.

I’ll report again on progress, from the DPS science meeting in Ithaca, NY.

It’s going to be great! Thanks for coming along with us as we fly by this crazy moon.

4 thoughts on “Enceladus,Here We Come!”