On Feb. 15th, an asteroid some 50 meters wide, neither very large nor very small, and is probably made of stone, as opposed to metal or ice will fly past Earth closer than many man-made satellites. Since regular sky surveys began in the 1990s, astronomers have never seen an object so big come so close to our planet. 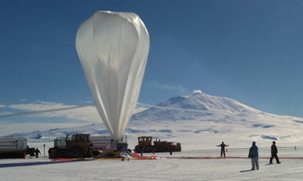 If you are using the NASA Explorer Schools featured lesson Engineering Design: Forces and Motion — Balloon Aerodynamics Challenge, you may extend the lesson’s relevancy by introducing your students to NASA’s Super-TIGER balloon.

Flying high over Antarctica, a long-duration balloon has broken the record for longest flight by a balloon of its size.

The record-breaking balloon, carrying the Super Trans-Iron Galactic Element Recorder — or Super-TIGER — experiment, has been afloat for 46 days and is on its third orbit around the South Pole.

This feat is an outstanding achievement for NASA’s Astrophysics balloon team. Keeping these huge balloons aloft for such long periods lets NASA do “forefront” science that would be difficult to do otherwise.

To read more about this record-setting flight, visit https://www.nasa.gov/centers/wallops/news/supertiger-record.html.

You can find Engineering Design: Forces and Motion — Balloon Aerodynamics Challenge on the NES Virtual Campus.

As part of a series of electronic professional development experiences, the NASA Explorer Schools project and the National Science Teachers Association are hosting a 90-minute live professional development Web seminar on Feb. 13, 2013 at 6:30 p.m. EST. This seminar showcases two lessons from the “On the Moon” educator guide: “On Target” and “Feel the Heat.” Learn how to use the engineering design process to challenge students to solve problems related to exploring the moon. This session will fully prepare you to implement these activities in your classroom.

This is the last time during this school year that this Web seminar will be offered.

For more information and to register online, visit the NSTA Learning Center.

Connect with NASA’s Digital Learning Network, and let your students explore history and science with NASA and Tuskegee. On Feb. 20, from 2-3 p.m. EST, your students will have a chance to discuss the early frontiers of aviation with a contrail scientist and a pilot who is president of the Howard Baugh Chapter-Tuskegee in Petersburg, Va.

Classes will be selected to participate in this live event by Feb. 11, 2013.

Spots are limited. Email Bonnie Murray if you are interested in having your students participate.

For more information about this event, visit the Digital Learning Network website.

Congratulations to two NASA Explorer Schools educators, Lanena Berry from the Houston Independent School District, in Houston, Texas, and Joan Labay-Marquez from Curington Elementary School in Boerne, Texas, who are two of seven recipients of the 2013 American Institute of Aeronautics and Astronautics Foundation Educator Achievement Award.

The AIAA Foundation presents the Educator Achievement Awards every two years to classroom teachers who have demonstrated exemplary efforts in exciting students in grades K–12 about the study of mathematics, science and related technical studies, and in preparing them to use and contribute to tomorrow’s technologies.

AIAA Executive Director and former NASA astronaut Sandra H. Magnus stated: “The seven educators selected to receive the 2013 AIAA Foundation Educator Achievement Award are a testament to how love of a subject coupled with inspiring teaching helps build the next generation of aerospace engineers and scientists. All it takes is a single spark, lit by an engaging teacher, to ignite the curiosity and interest of a student about the wonder and creativity resident in the world of science and engineering.”

Each winner will receive a trip to Washington, D.C., and will be honored at the AIAA Aerospace Spotlight Awards Gala on May 8, 2013.

The AIAA Foundation Educator Achievement Award has been presented to over 52 educators since 1997 and has become a sought-after honor in the education community.

The deadline for nominations is April 1, 2013. The nomination form should be completed early enough to ensure that the nominated teacher is given enough time to thoroughly prepare an application that reflects exemplary teaching prior to the application deadline. Applications are due by May 1, 2013.

The Presidential Awards for Excellence in Mathematics and Science Teaching (PAEMST) are the highest honors bestowed by the United States government specifically for K-12 mathematics and science (including computer science) teaching. Established by Congress in 1983, the PAEMST program authorizes the President to bestow up to 108 awards each year.

Awards are given to mathematics and science (including computer science) teachers from each of the 50 states and four U.S. jurisdictions. The jurisdictions are Washington, D.C.; Puerto Rico; Department of Defense Education Activity schools; and the U.S. territories as a group (American Samoa, Guam, the Commonwealth of the Northern Mariana Islands, and the U.S. Virgin Islands).

The award recognizes those teachers who develop and implement a high-quality instructional program that is informed by content knowledge and enhances student learning. Since the program’s inception, more than 4,200 teachers have been recognized for their contributions in the classroom and to their profession.

Awardees serve as models for their colleagues, inspiration to their communities, and leaders in the improvement of mathematics and science (including computer science) education. The National Science Foundation administers PAEMST on behalf of The White House Office of Science and Technology Policy.

Visit the Presidential Awards website for additional information, to nominate someone, or to apply.

As part of a series of electronic professional development experiences for educators, the NASA Explorer Schools project and the National Science Teachers Association are hosting a 90-minute live professional development Web seminar on Feb. 5, 2013 at 6:30 p.m. EST. Get background information about water recycling on the International Space Station, and then see how to incorporate the information into an exciting hands-on, inquiry-based challenge requiring students to solve a problem. Participants will watch a video showing students engaged in the challenge and discuss possible modifications to the challenge in order to adapt it for different students and classroom situations.This is the final time this Web seminar will be held during this school year.For more information and to register online, visit http://learningcenter.nsta.org/products/symposia_seminars/NES3/webseminar3.aspx. To learn more about the NASA Explorer Schools project, visit http://explorerschools.nasa.gov.

Registration is open for the 20th Annual NASA Great Moonbuggy Race. High school and college students are challenged to design and build a vehicle that addresses a series of engineering problems similar to those faced by the original lunar-roving vehicle team. Each school may enter up to two teams. The race will take place April 25-27, 2013, in Huntsville, Ala., at the U.S. Space & Rocket Center.

For more information about the competition and to register online, visit http://moonbuggy.msfc.nasa.gov/index.html.

Teams with questions should contact Diedra Williams at Diedra.A.Williams@nasa.gov.