The sun emitted a mid-level solar flare, peaking at 6:49 p.m. on June 7, 2013. Solar flares are powerful bursts of radiation. Harmful radiation from a flare cannot pass through Earth’s atmosphere to physically affect humans on the ground, however, when intense enough, they can disturb the atmosphere in the layer where communications signals travel. This disrupts radio signals for as long as the flare is ongoing, anywhere from minutes to hours.

This flare is classified as an M5.9 flare. M-class flares are the weakest flares that can still cause some space weather effects near Earth. This flare caused a moderate radio blackout, rated an R2 on the National Oceanic and Atmospheric Administration’s space weather scales, which range from R1 to R5. It has since subsided.

This is a real-world connection to the NASA Explorer Schools featured lesson, Geometry: Space Math Problems—Solar Storms. To access this lesson, visit the NES Virtual Campus.

To read more about this solar flare and see an image of the flare captured by NASA’s Solar Dynamics Observatory, visit https://www.nasa.gov/mission_pages/sunearth/news/News060813-m5.9flare.html.

Students and educators are invited to join NASA for the Sally Ride EarthKAM Summer 2013 Mission from July 9-12, 2013. Guide your students in hands-on research as they program a camera aboard the International Space Station to take pictures of specific locations on Earth. The optional online curriculum at the Sally Ride EarthKAM website is designed for middle school students, but could easily be adapted for other grade levels. All students and educators are invited to participate, including participants in summer and after-school programs.

For more information and to register for the upcoming mission, visit the Sally Ride EarthKAM home page at https://earthkam.ucsd.edu/.

NASA’s Gravity Recovery and Interior Laboratory, or GRAIL, mission has uncovered the origin of massive invisible regions that make the moon’s gravity uneven, a phenomenon that affects the operations of lunar-orbiting spacecraft.

Because of GRAIL’s findings, spacecraft on missions to other celestial bodies can navigate with greater precision in the future.

GRAIL’s twin spacecraft studied the internal structure and composition of the moon in unprecedented detail for nine months. They pinpointed the locations of large, dense regions called mass concentrations, or mascons, which are characterized by strong gravitational pull. Mascons lurk beneath the lunar surface and cannot be seen by normal optical cameras.

This mission update is a great classroom extension to the NASA Explorer Schools featured lesson, Engineering Design Process: On The Moon. To have your students playing the role of engineers in designing lunar missions, access this set of engineering design challenges on the NES Virtual Campus. 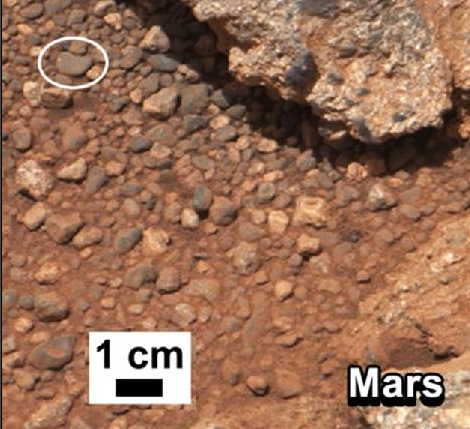 Detailed analysis and review have borne out researchers’ initial interpretation of pebble-containing slabs that NASA’s Mars rover Curiosity investigated last year: They are part of an ancient stream bed.

The rocks are the first ever found on Mars that contain stream bed gravel. The sizes and shapes of the gravel embedded in these conglomerate rocks — from the size of sand particles to the size of golf balls — enabled researchers to calculate the depth and speed of the water that once flowed at this location.

To learn more about the challenges the Mars Science Laboratory team faced during Curiosity’s landing, also known as the “seven minutes of terror”, check out NASA Now: Forces and Motion: Curiosity—Entry, Descent and Landing. You can access this classroom video on the NASA Explorer Schools Virtual Campus.

To read more about this discovery by Curiosity on Mars, visit https://www.nasa.gov/mission_pages/msl/news/msl20130530f.html

NASA Explorer Schools and the National Science Teachers Association are hosting a 90-minute live professional development Web seminar for grades 6-8 educators on June 4, 2013, at 6:30 p.m. EDT. This seminar will address the Next Generation Science Standards. As a result of this seminar, you will be able to use the lesson “Engineering a Stable Rocket” from NASA’s Rockets Educator Guide to address the middle school dimensions associated with forces and interaction performance expectations. This seminar provides an overview of the activity, explores the NASA connections, shares tips and tricks for implementing this lesson in the classroom, showcases videos of students engaged in the lesson and discusses possible modifications or extensions.

This is the only time this seminar will be offered during the current school year.

For more information and to register online, visit the NSTA Learning Center.