In this NASA Now program, introduced by Elizabeth Thiel, an NES educator at Komachin MiddleSchool, Shane Brooke, welding engineer at Marshall Space Flight Center, discusses friction stir welding and its use in the engineering of spacecraft.

This program is available on the NES Virtual Campus beginning Feb. 6. View a one minute preview of the program, below.
NASA Now Minute

NASA’s Mars rover Curiosity has placed its drill onto a series of four locations on a Martian rock and pressed down on it with the rover’s arm, in preparation for using the drill in coming days.

The rover carried out this “pre-load” testing on Mars on Jan. 27. The tests enable engineers to check whether the amount of force applied to the hardware matches predictions for what would result from the commanded motions.

The next step is an overnight pre-load test, to gain assurance that the large temperature change from day to night at the rover’s location does not add excessive stress on the arm while it is pressing on the drill. At Curiosity’s work site in Gale Crater, air temperatures plunge from about 0 degrees Celsius in the afternoon to -65 degrees Celsius overnight. Over this temperature swing, the rover’s arm, chassis and mobility system grow and shrink by about 2.4 millimeters, a little more than the thickness of a U.S. quarter coin.

To read more about the upcoming drilling, visit the Curiosity Mission News.

To learn about the engineering and challenges involved in getting Curiosity to Mars, check out four special Mars Month episodes of NASA Now on the NASA Explorer Schools Virtual Campus.

As part of a series of electronic professional development experiences for educators, NASA Explorer Schools and the National Science Teachers Association are hosting a 90-minute live professional development Web seminar for educators on Jan. 30, 2013 at 6:30 p.m. EST. In this Web seminar, participants will learn about an engaging algebra activity called “Finding Habitable Planets” that allows students to analyze NASA data with the hopes of discovering planets in habitable zones of solar systems.

For more information and to register online, visit http://learningcenter.nsta.org/products/symposia_seminars/NES3/webseminar2.aspx.

As part of a continuing series of electronic professional development experiences for educators, the NASA Explorer Schools project and the National Science Teachers Association are hosting a 90-minute Web seminar on Jan. 24, 2013, at 6:30 p.m. EST. Use NASA mission data collected from NASA satellites to see how a planet’s climate is determined. Attend this session and discover how you can incorporate authentic NASA data into your classroom to provide a real-world connection for your students.

For more information and to register online, visit http://learningcenter.nsta.org/products/symposia_seminars/NES3/webseminar24.aspx.

NASA participated in the inauguration of President Obama on Jan. 21 in Washington, D.C., with two floats and marchers in the inaugural parade. Full-size models of the Curiosity Mars rover and Orion, the multi-purpose capsule that will take our astronauts farther into space than ever, were featured alongside Curiosity team members from NASA’s Jet Propulsion Laboratory as well as current and former astronauts.

This slideshow is a nice extension to NASA Explorer Schools’ Mars Month NASA Now programs. To watch these programs and learn about the amazing engineering feats behind behind the landing of Curiosity on Mars, visit the NES Virtual Campus at http://explorerschools.nasa.gov.

As part of a series of electronic professional development experiences for educators, the NASA Explorer Schools project and the National Science Teachers Association are hosting a 90-minute live professional development Web seminar for educators on Jan. 23, 2013, at 6:30 p.m. EST. Learn how to use the “What Are We Made Of?” hands-on activity to integrate mathematics and physical science in your classroom. Discover how students can use statistical sampling to estimate the chemical composition of the sun by analyzing data in a way similar to the one used by scientists who analyzed solar particles collected by the Genesis spacecraft.

For more information and to register online, visit http://learningcenter.nsta.org/products/symposia_seminars/NES3/webseminar23.aspx.

Middle school educators are invited to join NASA for the International Space Station EarthKAM Winter 2013 Mission from Jan. 29 – Feb. 1, 2013. Guide your students in hands-on research as they program cameras aboard the space station to take pictures of specific locations on Earth.

If you’re new to EarthKAM or if you registered for a past mission but weren’t sure how to navigate the website and request images, you can sign-up to attend a 30-minute online EarthKAM information session.

For more information about EarthKAM and to register for the upcoming mission, visit the EarthKAM home page.

If you have questions about the EarthKAM project, email ek-help@earthkam.ucsd.edu. 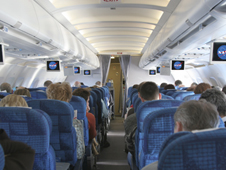 Are you traveling by air this year? If so, then you’ll be in the company of millions who are directly benefiting from the ongoing research performed by NASA’s aeronautical innovators.

NASA’s “aeronauts” even helped scientists learn about the Martian atmosphere during Curiosity’s nail-biting descent toward the Red Planet in August 2012.

To read about some aeronautics highlights from 2012, visit https://www.nasa.gov/topics/aeronautics/features/2012_highlights.html.

This article is a great extension to the NASA Explorer Schools lesson, “Distance/Rate/Time Problems: Smart Skies.” To access this lesson, visit the NES Virtual Campus at http://explorerschools.nasa.gov.

Be sure to check out NASA’s video review of the agency’s incredible accomplishments during 2012, below. The 50-minute video details the amazing achievement of landing Curiosity on the surface of Mars.To learn more about the many processes involved in the landing and the engineering behind them, check out January’s Mars Month episodes of NASA Now on the NES Virtual Campus at http://explorerschools.nasa.gov.

To stream or download this program, or any other “This Week @ NASA” videos visit https://www.nasa.gov/multimedia/videogallery/index.html?media_id=157200021.
This Year @ NASA

Teachers, check out the Jet Propulsion Laboratory’s Eyes on the Solar System website, a 3-D environment full of real NASA mission data. Your students can explore the cosmos from their computer. They can hop on an asteroid or fly with NASA’s Voyager spacecraft. They can explore individual planets or see the entire solar system moving in real time. It’s up to them: They control space and time.

In addition to exploring the solar system, the website currently features interactive explorations of the Curiosity rover’s mission on Mars; Mission Juno’s trip to Jupiter; the lunar explorations of the Gravity Recovery And Interior Laboratory, or GRAIL, and MoonKam missions; and the radioisotope power systems behind Curiosity and other missions.

JPL’s Eyes on the Solar System is located at http://eyes.nasa.gov.