Scientists have made a biological discovery in Arctic Ocean waters as unexpected as finding a rainforest in the middle of a desert. A NASA-sponsored expedition named ICESCAPE punched through three-feet of sea ice to find waters richer in microscopic marine plants, essential to all sea life, than any other ocean region on Earth.

The microscopic plants, called phytoplankton, are the base of the marine food chain. Phytoplankton were thought to grow in the Arctic Ocean only after sea ice had retreated for the summer. Scientists now think that the thinning Arctic ice is allowing sunlight to reach the waters under the sea ice, catalyzing the plant blooms where they had never been observed.

The finding reveals a new consequence of the Arctic’s warming climate and provides an important clue to understanding the impacts of a changing climate and environment on the Arctic Ocean and its ecology.

The findings were published in the journal Science.

Credit: For more information read the article at Science at NASA.

This seminar will provide instruction on how to integrate the Skeletal System: Human Physiology in Space lesson into your curriculum. There are two classroom activities in this lesson focusing on the effects of spaceflight on human physiology. Obtain information about the effect microgravity has on the physiology of astronauts and learn about the countermeasures NASA uses to help overcome these effects when they return to Earth. For more information and to register for this Web seminar visit  http://learningcenter.nsta.org/products/symposia_seminars/NES2/webseminar26.aspx.

NASA Now: Juno
June 13, 2012
Tracy Drain, a Juno Systems Engineer at the Jet Propulsion Laboratory discusses the Juno spacecraft and why NASA is so interested in studying Jupiter. She describes the instruments the spacecraft will carry and how it will send data back to Earth. She also talks about why NASA is studying the gas giant and what scientists hope to learn when Juno reaches Jupiter in the summer of 2016.

In this episode of NASA Now, learn about how designing, building, and testing are important steps of the engineering process for the Multi-Purpose Crew Vehicle.  Christie Sauers, Mockup Lead for the Multi-Purpose Crew Vehicle, discusses full-scale mockups and designing, building and testing as important steps of the engineering design process for the MPCV. She also talks about how NASA uses mockups to understand the design requirements necessary for building spacecraft. This program is available on the NES Virtual Campus beginning June 6. 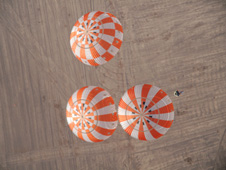 NASA recently successfully conducted a drop test of the Orion crew vehicle’s entry, descent and landing parachutes high above the Arizona desert in preparation for the vehicle’s orbital flight test, Exploration Flight Test -1, in 2014. Orion will carry astronauts deeper into space than ever before, provide emergency abort capability, sustain the crew during space travel and ensure a safe re-entry and landing.

To read more and view images of the parachute testing, visit: https://www.nasa.gov/exploration/systems/mpcv/chutetest_041812.html

As Orion continues preparation to take astronauts further into space, take a look back at the recently ended shuttle program and have your students track the linear regression of a space shuttle launch! Check out the launch video of Shuttle mission STS-121 then have them create a scatter plot from real launch data. Linear Regression: Exploring Space Through Math—Space Shuttle Ascent is a NASA Explorer Schools featured lesson and is available in the Lesson Library on the NES Virtual Campus home page.

This mottled landscape showing the impact crater Tycho is among the most violent-looking places on our moon. Astronomers didn’t aim NASA’s Hubble Space Telescope to study Tycho, however. The image was taken in preparation to observe the transit of Venus across the sun’s face on June 5-6.

Hubble cannot look at the sun directly, so astronomers are planning to point the telescope at Earth’s moon, using it as a mirror to capture reflected sunlight and isolate the small fraction of the light that passes through Venus’s atmosphere. Imprinted on that small amount of light are the fingerprints of the planet’s atmospheric makeup.

As the transit of Venus approaches, have your students use transit light curve data gathered by the Kepler mission to calculate the size of planets in other solar systems. To complete this lesson, students determine if these planets are in habitable zones. To gain access to Algebraic Equations: Transit Tracks—Finding Habitable Planets, visit the NES Virtual Campus.

In 1768, when James Cook sailed out of Plymouth harbor to observe the Transit of Venus in Tahiti, the trip was tantamount to a voyage through space. The remote island had just been “discovered” a year earlier, and by all accounts it was as strange and alien to Europeans as the stars themselves. Cook’s pinpoint navigation to Tahiti and his subsequent observations of Venus crossing the South Pacific sun in 1769 have inspired explorers for centuries.

One of those explorers is about to beat Cook at his own game. High above Earth, astronaut Don Pettit is preparing to photograph the June 5th Transit of Venus from space itself.