NASA Education is pleased to announce a new opportunity for educators to access dynamic content and professional development based upon our unique mission of research and discovery. As part of the new NASA Educator Professional Development offerings, beginning this fall, educators will be able to locate NASA content in the following ways:

In 2003, NASA rolled out an innovative project called NASA Explorer Schools. A unique new project, NASA Explorer Schools teamed schools, teachers and students with NASA resources and personnel in a refreshing new way, giving teachers and students access to the goings on of NASA as never before. Over the years, the NES project grew as more schools, teachers and communities became committed to the goals put forth by NES. And now, 10 years after its beginning, NES can boast that it has impacted hundreds of schools and teachers, along with hundreds of thousands of students.

Congratulations to NASA Explorer Schools educators Elizabeth Petry at Mack Benn Jr. Elementary School, Suffolk, Va., and Tammy Lundy from Forest Lake Elementary Technology Magnet School, Columbia, S.C. Petry and Lundy have been selected to attend the 2013 Honeywell Educators @ Space Academy at the U.S. Space & Rocket Center in Huntsville, Ala. HE@SA is a professional development program for teachers who want to learn new and innovative techniques to inspire and educate their students about science and mathematics.

This summer, more than 200 teachers will participate as the HE@SA’s Class of 2013. All costs associated with travel, tuition, room and board are sponsored by Honeywell Hometown Solutions.
Form more information about this program, visit the HE@SA website.

Curiosity continues to work in good health. The rover traveled 30 meters during Sol 26, on Sept. 1. The drive included a test of the rover’s “visual odometry” capability for using onboard analysis of images to determine the distance it has traveled.

Throughout Sept., NASA Now classroom videos highlight various aspects of Curiosity’s mission on Mars. Be sure to check out NASA Now: Mars Month on the NASA Explorer Schools Virtual Campus.

Now that NASA’s rover, Curiosity, has successfully landed on Mars, NES is excited to designate September 2012 as Mars Month. Each week during September, NASA Now classroom videos will highlight an aspect of Curiosity’s mission on Mars.

NASA Now is a weekly 5-7-minute classroom video designed to give your students firsthand information about NASA’s missions, research and facilities and to introduce them to some of NASA’s most fascinating people and careers. You can find a new NASA Now video on the NASA Explorer Schools Virtual Campus each Wednesday during the school year.

For each NASA Now video, you get a description of the video, an Extension Activity, and questions you may ask your students before and after watching the video. There is also a set of vocabulary words, related resources, career information, and a connection to NASA missions or projects. All of these components are provided so you can easily use the NASA Now programs to bring relevant current NASA events to your classroom.

Closed-captioned videos can be streamed from the Web, or a non-captioned mp4 version can be downloaded to your computer.

You may preview NASA Now videos at the NES YouTube channel. 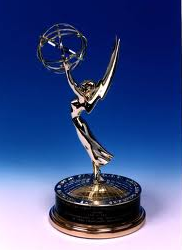 The NASA Explorer School project was honored with an Emmy Award from the Lower Great Lakes Chapter of the National Association of Television Arts and Sciences on June 2, 2012. NASA Now, a weekly 5-7 minute video program is a classroom resource for teachers to show grades K-12 students what a scientist, engineer, or technician looks like, sounds like, and what kinds of work they do at NASA. Each week, students see real people putting science, technology, engineering and mathematics to work in the unique context of NASA careers, missions, research and facilities.

NASA Now received the prize for production excellence in the category of Informational/Instructional: Program/Series or Special.
For more information visit https://www.nasa.gov/offices/education/programs/national/nes2/home/NASANow-emmy-2012.html
View the NASA Now entries for the Emmy Award.

Receive information about the applications of linear equations at NASA and learn how to implement the Breaking Barriers activity. Breaking Barriers provides students an opportunity to step into the shoes of a NASA engineer to design, build and test an X-1 balloon.

For more information and to register for this Web seminar visit https://digitalmedia.wufoo.com/forms/nes-webinar-registration-linear-equations/.

Chemistry of Water: Mars Exploration — Is There Water on Mars? Web Seminar

For more information and to register for this Web seminar, visit http://learningcenter.nsta.org/products/symposia_seminars/NES2/webseminar25.aspx.

The seasons on Earth are caused by the tilt of the Earth as it rotates on its axis and revolves around the Sun. The 23.5 degree tilt of the Earth’s axis results in changes of the angle of incident sunlight. A common misconception among students is that the seasons are caused by the distance between the Earth and Sun. In fact, summer in the Northern Hemisphere occurs at aphelion, the farthest distance between the Earth and Sun, and follows summer solstice when incident sunlight is most concentrated along the Tropic of Cancer, 23 degrees 26 minutes 22 seconds.

Preview NASA Now: The Reason for the Seasons

For more information about the project and to register for the upcoming mission, visit the http://EarthKAM home page.

If you have questions about the EarthKAM project, please email ek-help@earthkam.ucsd.edu.

If you were a participant in the NASA Explorer Schools, or NES, project in the 2010-2011 school year, you are now able to enroll in the project for the upcoming school year. By enrolling, you will ensure that you have continued access to NES’s engaging and exciting classroom materials, including updates to the Virtual Campus and a fresh collection of NASA Now and Live Chat events planned for the upcoming year.

If you registered for the NES Project for the first time on or after May 18, 2012, you do not need to complete a 2012-2013 enrollment form. You are already registered for next year!

Are you wondering why you have to enroll for next year?

NES wants to keep an up-to-date record of active project participants. In order to do so, we are asking all current participants to enroll in the project for the upcoming year.

What does enrollment entail?

When you log onto the Virtual Campus, you will receive a prompt to fill out a brief enrollment form, where you can indicate any changes to your personal, classroom or school information. Then all you have to do is click “submit” and you’ll be ready to take advantage of NES’s educational resources and bring your 2012-2013 STEM classroom curriculum alive! For answers to frequently asked enrollment questions, see the NES FAQ page, or email your questions to the NES Help Desk.

This seminar will provide instruction on how to integrate the Skeletal System: Human Physiology in Space lesson into your curriculum. There are two classroom activities in this lesson focusing on the effects of spaceflight on human physiology. Obtain information about the effect microgravity has on the physiology of astronauts and learn about the countermeasures NASA uses to help overcome these effects when they return to Earth. For more information and to register for this Web seminar visit  http://learningcenter.nsta.org/products/symposia_seminars/NES2/webseminar26.aspx.

NASA Now: Juno
June 13, 2012
Tracy Drain, a Juno Systems Engineer at the Jet Propulsion Laboratory discusses the Juno spacecraft and why NASA is so interested in studying Jupiter. She describes the instruments the spacecraft will carry and how it will send data back to Earth. She also talks about why NASA is studying the gas giant and what scientists hope to learn when Juno reaches Jupiter in the summer of 2016.

NASA Explorer Schools has officially kicked off enrollment for the 2012-2013 school year. Current participants can re-enroll for the upcoming year to ensure continued access to NES’s engaging and exciting classroom materials.

Re-enrollment is simple and painless.  When you next log onto the Virtual Campus, you will receive a prompt to fill out a brief re-enrollment form where you can update your personal, school and classroom information. Fill out the form, click “submit”, and you’ll have full access to NES’ exciting and engaging educational resources and opportunities for the upcoming school year. The information you provide on the form can always be updated at any time through your profile.

Anyone enrolling for the first time in the NES project after May 17 will automatically be enrolled for the 2013 school year.

If you have any questions, contact the NES Help Desk.