A lunar eclipse occurs when the moon passes behind Earth so that Earth blocks the sun’s rays from striking the moon. This can occur only when the sun, Earth and moon are aligned exactly, or very closely, with Earth in the middle. Hence, there is always a full moon the night of a lunar eclipse.

In this NASA Now program, astronomer Steven Edberg from the Jet Propulsion Laboratory in Pasadena, Calif., shines some light on the science behind lunar eclipses. 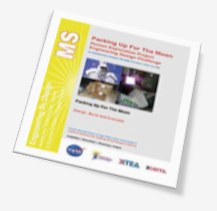 Do you want to learn how NASA Explorer Schools educator April Bidwell’s class at Wewahitchka Elementary School turned the Lunar Plant Growth Chamber into a full classroom experiment?
Students planted basil seeds, which had flown on the International Space Station, in three different everyday items. The items included diapers, an old tennis shoe and a wasp nest. Which do you think grew seeds the best? Find out in NEON.
Read more about this exciting activity at http://neon.intronetworks.com/#. Register, log in, join the NES group and navigate to the Engineering Design Challenge: Plant Growth Chamber forum. Look for Bidwell’s complete write-up, entitled “Fifth-Grade Class Carries out Lunar Plant Growth Chamber Challenge.”
Do this NES activity in your classroom to find out how creative your own students can be. Log it, and you’ll be on your way to an all-expenses-paid NASA summer research experience as part of our Recognition Program!
Link to the NES Virtual Campus home page.