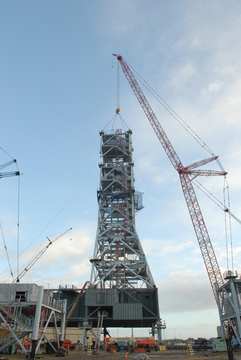 NASA’s Kennedy Space Center in Florida, a crane positions a sixth tower segment onto five segments already secured to a new mobile launcher, or ML, being constructed to support the Constellation Program. When completed, the tower will be approximately 345 feet tall and have multiple platforms for personnel access. The construction is under way at the mobile launcher park site area north of Kennedy’s Vehicle Assembly Building. The launcher will provide a base to launch the Ares I rocket, designed to transport the Orion crew exploration vehicle, its crew and cargo to low Earth orbit. Its base is being made lighter than space shuttle mobile launcher platforms so the crawler-transporter can pick up the heavier load of the tower and taller rocket. For information on the Ares I, visit https://www.nasa.gov/ares

4 thoughts on “MLP is rising up at Kennedy Space Center”