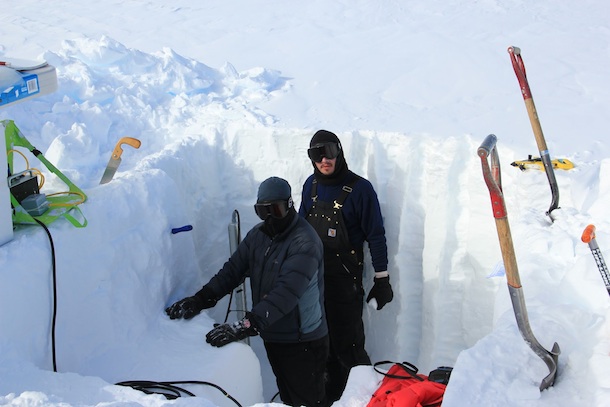 To understand how the Antarctic ice sheet is going to behave in the future, scientists first need to know how much snow and ice is in there. And a major step in determining that figure is calculating how much snow accumulates each year on the frozen continent.

Researchers from the Satellite Era Accumulation Traverse (SEAT) are extracting ice cores in central West Antarctica to update snow accumulation records, since the majority of previously collected cores only extend to the mid-1990s. The scientists analyzed three of the five cores collected during their 2010-2011 field campaign, and their preliminary results show that snow accumulation has decreased significantly (up to 40 percent) across central West Antarctica during the last decade.

“This is the opposite of what you’d expect at a time when there’s a significant warming of West Antarctica,” says Landon Burgener, of the SEAT team, who presented the group’s preliminary results at the American Geophysical Union’s Fall Meeting.

Higher temperatures mean higher water evaporation, which in theory should lead to more snowfall. The measured decrease in snow accumulation goes against the predictions of global climate models, so why is it happening? It might have to do with less frequent, weaker storms in the area, says Summer Rupper, one of the principal investigators of the SEAT project. Less storms means that the extra moisture in the atmosphere ends up falling back to Earth somewhere else, probably over the ocean. Next, the team will examine the (scarce) existing weather data for West Antarctica to see if it’s true that the area is becoming less stormy. Rupper also wants to use ground-based radar data to study how representative the cores are of the places where they were extracted.

Meanwhile, other members of the SEAT team are currently in Antarctica to collect eight more cores that they will analyze to see if they also show a decline in snow accumulation. 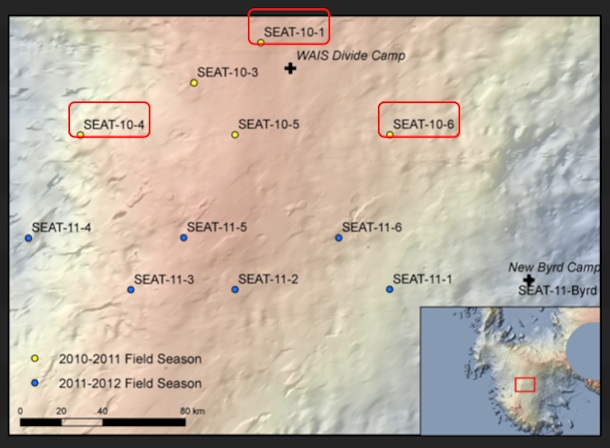 Text by Maria-José Viñas. Photo and map courtesy of the SEAT team: The photo (top) shows members of the team drilling an ice core during the 2010-2011 season; the map (above) shows the drilling sites in central West Antarctica. Follow the work of the SEAT researchers in Antarctica on their blog, “Notes from the field.”