I find working with the International Space Station for plant growth studies inspiring, and it’s important to me to share my enthusiasm with the next generation of researchers. Most of the students that work with me in the lab come through some sort of internship program and get class credit for doing research. Students can also apply for research awards from North Carolina State University to fund their work.

My current project, Plant Signaling, generated a lot of interest when I spoke at the university biology club. This talk resulted in several volunteers who wanted to work in the lab, because everyone is excited about doing experiments in space.

The flight portion of the investigation went well. We have images from two experimental runs in the European Modular Cultivation System (EMCS) centrifuge, which the students help us analyze for measurements of plant growth. For the analysis, students measure the root lengths in flight photos to get an idea of the total amount of growth. 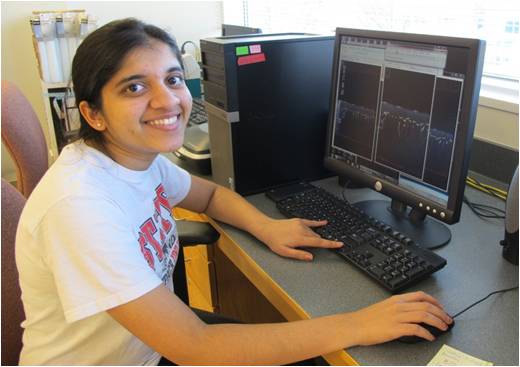 One of the goals of this study is to look at the impact of microgravity on the Arabdopsis thaliana plant growth by comparing how the roots and shoots orient themselves. Seed samples for the study include a wild type and a transgenic line. Plants from the transgenic line are genetically modified to affect their ability to sense and respond to environmental changes.

When examining the images, the first thing we look at is how well the seeds grew. The germination was excellent, and because we have images from different time points—every six hours during five days of operations in orbit—we can compare between the different lines and between the different gravity settings for how the seedlings grew during that period of time. 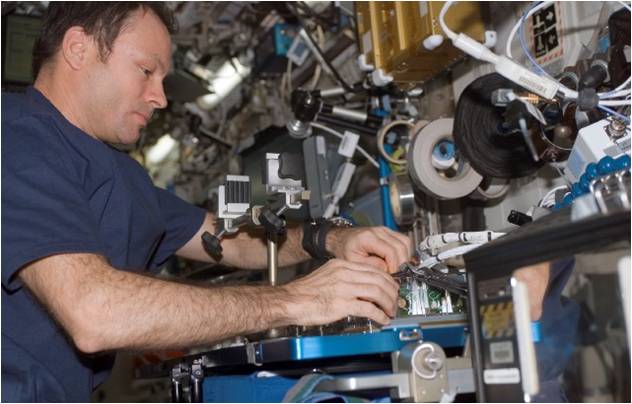 We have many images from both the micro-g and 1g environment samples thanks to the setup of the EMCS. The EMCS has two chambers, which is nice because it includes two centrifuges. This allows you to do your 1g ground control in space at the same time you do the microgravity testing. This means you only have the one variable of microgravity, while all other aspects of the space environment are the same.

Usually for microgravity studies you do a ground control vs. a flight experiment; but, it’s not just the gravity that’s different. There are other things that you cannot measure or replicate from that environment, such as radiation, vibration or the presence of other gases. This is a very beneficial control if you want to get at just the difference between microgravity and 1g. In addition, by carrying out a ground reference control on Earth, we can get an idea of some of the other space effects that are not so well defined at this time. 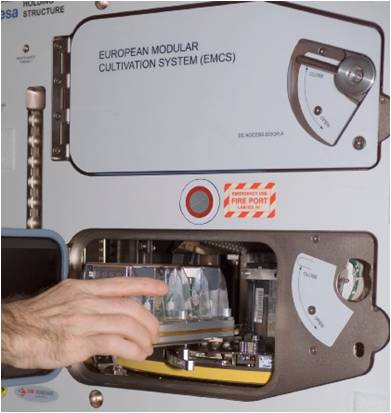 We would like to do more advanced analysis to see if there is any difference in the microgravity vs. the 1g plants. We expect less organized growth in space compared to on the ground, however this is not obvious from looking at the images. We may need to analyze the images more closely, and we are looking at options to see whether or not the pattern of growth is different. As of now we’ve just looked at the total amount of growth and there does not appear to be major differences.

Flight samples returned to Earth with SpaceX Dragon on March 26, so once we get them we can analyze the genetics of the physical samples to understand their changes at a molecular level—specifically in how the plants sense the microgravity environment and how this influences their growth and development. To do that, we will carry out global transcription profiles of the plants, which is like taking a “snapshot” of all the genes that were expressed in the plant. This tells us how the plants are responding, because even though they may look the same, at a molecular level there may be different pathways that are up or down regulated—showing an increase or decrease in cell response—in the transgenic line compared to the wild type. 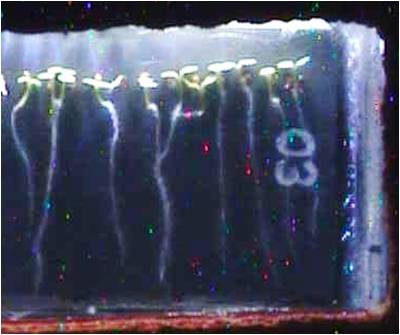 The image above shows seedlings from the Plant Signaling investigation aboard the International Space Station. (NASA)

By comparing those two plant types, we hope to understand what signaling pathways are involved in plant responses, not just to microgravity, but also based on the space environment’s other factors. We have data from previous years of ground work where we looked at the response of these transgenic plants, and we know they are a little bit delayed and slow to respond to gravity stimulation. If you place a plant horizontally, after some time the shoots and roots reorient back to vertical. The transgenic plants have a harder time doing that, so we have an idea that this pathway is involved in sensing gravity and responding to it.

Just as experiments can produce surprising findings, I often find something unexpected from student participation in my research. Since I’m in a plant biology department, I usually get students that come to work with me with a strong biology background. But this study generated a lot of interest from students within bioengineering programs, so we had some interns who actually didn’t have that much of a biology emphasis, which turned out to be a learning experience both ways. 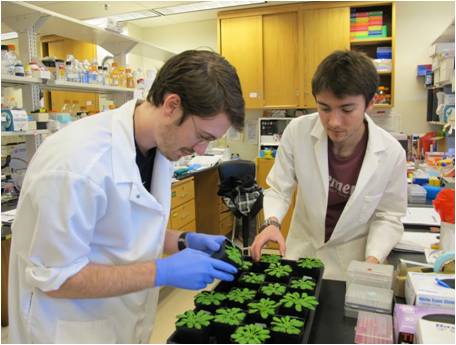 One student, Benjamin Cowen, was from the physical sciences, and he did some ground-based work using some of the prototype hardware that we use for the flight experiment. It was quite an inspiration for him, and now he’s looking to enter an astrobiology graduate program. It’s useful to have the different backgrounds, because people do not have the same preconceived ideas that we may have developed in biology studies.

I’ve had positive feedback from participating students, including some who have returned to continue working on the study. I had one local high school student, Kalyani Joshi, who came to talk to me before the investigation went up on the flight to the space station. Kalyani was excited about the study and came to volunteer and work in the lab. When she graduated from high school, she applied and was admitted to North Carolina State University. Now she’s a freshman and received some undergraduate research funding, so she’s going to continue to work in the lab. Kalyani’s been doing a lot of the measurements of the space images and really enjoys the project. 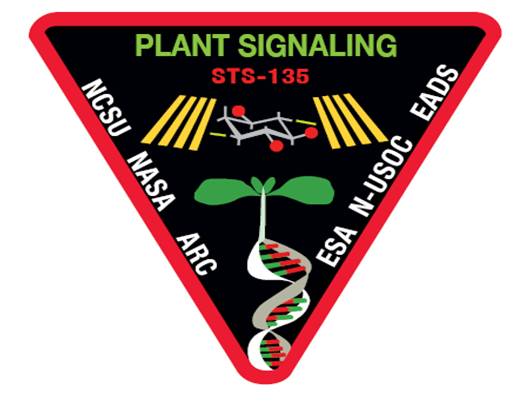 When we were preparing for the experiment, I had another student, Caroline Smith, who worked as my research associate. She is in graduate school now, but plans to come back to help analyze the flight samples. She’s really interested in the findings, as she was instrumental in setting up the experiment. 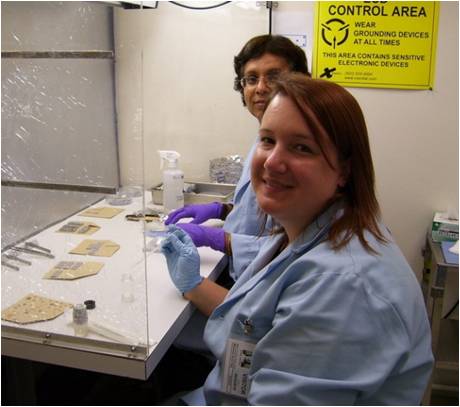 I’m highly committed to including students in the lab setting, having worked with half a dozen for this research project. I anticipate continuing to foster that collaboration. It will be fascinating to see not only what we learn when the Plant Signaling samples come in for analysis, but also to see what comes next for the students inspired by this study. 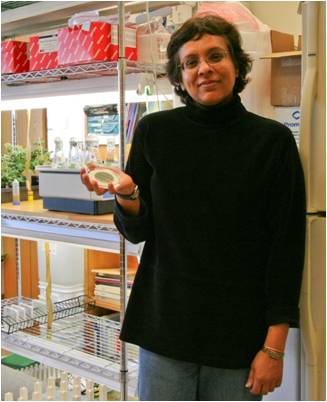 Imara Perera, Ph.D., is a research associate professor in the Department of Plant Biology at North Carolina State University. Her primary research interests are in understanding the role of lipid-mediated signaling in plant responses to environmental signals and stress, with the long term goal of improving plant growth under unfavorable conditions. She has been involved in plant gravitational biology research since her postdoctoral work, and she has been a principal investigator on NASA-funded ground-based research since 2001. Currently, Perera is the principal investigator on a spaceflight project entitled “Plant Signaling in Microgravity” to characterize the molecular mechanisms of plant responses to microgravity that was conducted aboard the International Space Station in 2011.