You might not be familiar with the term “colloids,” but you likely interact with some throughout your daily routines. What are they? Colloids are not pure liquids or pure solids, but rather liquids that have solid particles suspended in them, such as paint, milk and even blood.

On Earth, solid particles could clump together, causing spoilage in the example of food. They could also settle to the bottom of the solution through sedimentation. Removing gravity from the equation, though, makes the environment aboard the International Space Station a perfect place for researchers to study the self-assembly of these particles.

In the Advanced Colloidal Experiment- Heated-2 (ACE-H-2) investigation, researchers are studying a type of colloid that has different sizes of particles suspended within a fluid medium. There are small nanoparticles that are highly charged and large particles that are non-charged. When the suspensions were allowed to settle under gravity, the particles that were stabilized (while in suspension) formed highly ordered, three-dimensional colloidal crystal structures that were composed entirely of the larger, non-charged particles. The nanoparticles remained in suspension but was found to create a charge layer by forming cage or halo around the larger particles. This is a newly discovered process of colloidal stabilization called Nanoparticle Haloing (NPH).

As a result, the ACE-H-2 investigates the nature of the three-dimensional colloidal structures formed by NPH under microgravity conditions, and also assesses the structures when they are heated.

These “self-assembled colloidal structures” are vital to the design of advanced materials, for biomedical applications as an example.

ESA astronaut Tim Peake has participated in the ACE-H-2 investigation aboard the orbiting laboratory, and shared the picture above on social media. 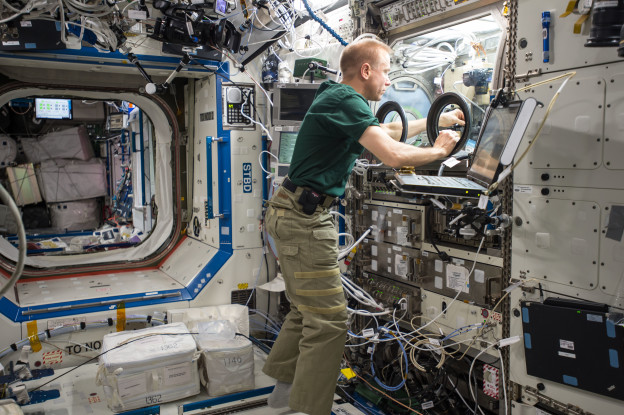