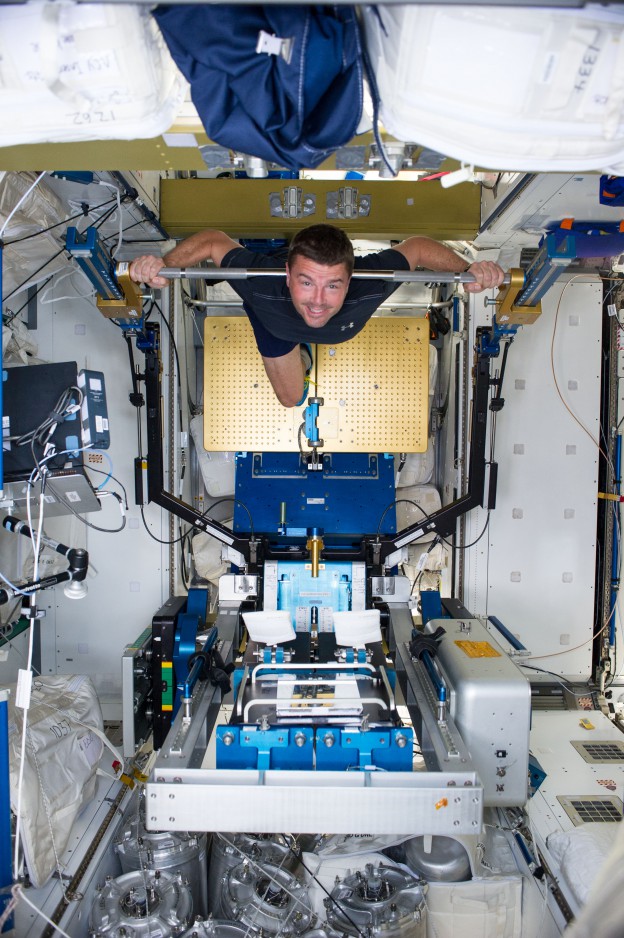 In today’s A Lab Aloft, Jean Sibonga, Ph.D., explains what’s next for microgravity bone research aboard the International Space Station. Using what we’ve learned in the last 50 years, investigations in orbit will help scientists pinpoint the impacts of countermeasures and refine treatments.

Boning Up on Skeletons in Space

All research begins with a question. In my case, two of them. My first question came from research I was doing during my postdoctoral study at the Harvard School of Dental Medicine working with oral biologists and orthodontists. Impressed with how an orthodontist can practically move teeth from one end of your mouth to another — I wondered about what told the cells to break down the bone at the front end of the tooth and then to fill in the cavity left by the tooth’s movement. What kind of chemical communication was happening to make this possible?

My second question came years later from former NASA administrator Michael Griffin during a visit to my directorate at Johnson Space Center. Griffin asked: “How can we make those bone cells stop what they are doing up in space?” He was referring to the real concern of accelerated bone loss for humans living in microgravity. He wanted to know if it were possible to stop the cells from breaking down bone.

Both questions about cell communication are fundamental to my research into bone strength and how it changes under certain circumstances, such as with aging or in microgravity. The answers are pivotal for long duration living in space, whether aboard the International Space Station or future missions. We’re trying to understand if space disrupts the communication between cells, whether this miscommunication is responsible for reducing the strength of bone and whether we can prevent this decline in strength by overriding this perturbed cellular communication.

You may have read about the findings from the first 50 years of bone research in space, compiled by my colleague Scott M. Smith, Ph.D., and his team. With Smith’s biochemical data we can get an idea of how cells are responding to the spaceflight environment—which cells are stimulated, which are suppressed or un-responsive. More importantly, we can try to figure out why this is happening—that is, are the signals that turn cells on or off not being produced or not being received? Pharmaceutical companies, for example, are particularly interested in this topic. The answer may help them develop medications for patient use on Earth. So, by refining our understanding of how current countermeasures work in space, at the cellular level, we might advance treatments for future space explorers, as well as Earth dwellers.

My research is an extension of Smith’s results. So far, our research suggests to us that the right combination of nutrition and specific types of exercise—can reduce the loss of bone mass in astronauts. What we still need to understand is whether the bones protected by the combined effects of diet and resistive exercise in space are as strong as they were before spaceflight.

My training in bone research  was in histomorphometry; simply, it means that I measured bone tissue. I measured the amount of newly-formed tissue, I counted the number of cells, I calculated the rates of bone formation, I measured cellular activity. So while biochemistry helps researchers surmise why and how changes in a bone’s mass are occurring in microgravity, bone histomorphometry helps us understand the cellular activity that change bone tissue. The result of these changes—by different cells, on different surfaces—can end up reshaping the structure of bone.

Since the bone structure is a contributor to bone strength, I think it’s really important to understand how bone strength changes with spaceflight—not just how bone mass or bone cells change. After all, NASA research tries to solve potential problems in space by asking: Are astronaut’s bones strong enough to do the operations of a mission without fracturing? Will exposure to spaceflight cause fractures to occur earlier in an aging astronaut after he/she returns to Earth?

Research that describes how living in space changes bone cell signaling, bone mineral and bone structure helps us to understand how space may be changing the strength of bone. But, these research tools require looking at bone tissue extracted from animals or in biopsies from test subjects—not a very attractive test to spin-off for an Earth-based doctor.

So, in Earth-based medicine, bone clinicians use an x-ray-based technology to measure the amount of bone minerals in an image of bone, without having to remove any bone tissue from the body. But those measurements are no longer sufficient for understanding whether or not a bone will fracture.  A previous flight study used a research technology called QCT to measure bone mineral in different astronauts’ hip bones before and after spaceflight. The study then used a computational tool that engineers developed to test the integrity of complex structures, like bridges or cars. This tool estimates the force of the load that would cause the hip to fracture by applying a “virtual” mechanical load to the computerized model of the hip until the structure “fails.” We are hoping to use these estimates to figure out which tasks performed by an astronaut could lead to a hip fracture.

My background in animal studies tells me that different countermeasures affect different types of bone cells in different locations of the hip. When countermeasures affect the very dense cortical bone shell differently from the spongy, more porous trabecular bone on the inside, then the overall structure of bone changes and the strength of the bone may change as a result. I like to remind people that you can’t “feel” when your bones are weakened. If we could compare hip bone strength with the loads of physical activity, we might be able to detect when an astronaut might overload his or her bones, even after return to Earth.

This is why I proposed a study called Hip QCT, which is building on results of multiple flight studies. It’s like a jigsaw puzzle. With biochemical tests, we can monitor the hormones that induce the production of protein signals, the signals that stimulate cellular activity, and the by-products that reflect the formation and the degradation of bone tissue. I hypothesized that Hip QCT can capture the difference between mechanical countermeasures, such as exercise, and biochemical countermeasures, like nutrition or pharmaceutical agents, because of its ability to detect changes in bone structure. In the end, we want to describe how countermeasures during spaceflight change the strength of the hip by changing the structure of hip bone.

There’s a problem with QCT as a test, however, as there is an issue with greater radiation exposure. One hip scan, for example, amounts to two to six days on the space station, depending on the age and sex of the astronaut. We’re trying to demonstrate the value of collecting QCT data and estimating hip strength. Someday we hope to detect the effects of spaceflight in astronauts on the connectivity of trabecular bone as observed in our mouse studies. We are investigating some emerging technologies which do not require any radiation. With these collective measures, we are hoping to prevent fractures by estimating which physical activities may cause bones to be overloaded during a mission or even after return to Earth.

Because we have an aggressive schedule for decision-making, NASA puts innovative approaches on a fast track for application. If NASA can clearly demonstrate the benefits of these innovations to protect astronaut health and performance, then the translation of these novel predictive capabilities may enhance the earlier diagnosis of osteoporosis in people here on Earth.

This was really brought home at last year’s meeting of the American Society for Bone and Mineral Research where I hosted a workshop. It was standing room only! Everything we learn about bone loss and rebuilding in space can also provide insights to the numerous scientists studying osteoporosis and its treatment on Earth.

In order to monitor changes in skeletal health that could lead to fracture, we need to leverage new and innovative ways of evaluating changes to bone tissue and the impact on bone strength. There’s a whole new generation of technologies and scientists to look into these questions. I am excited to see what we discover as we work together for better bones!

Jean Sibonga, Ph.D. is the lead for bone discipline in the Human Research Program at NASA’s Johnson Space Center in Houston. Sibonga received her B.S. in Chemistry and English from the University of Puget Sound in Tacoma, Washington. She later earned her Ph.D. in Biochemistry from Loma Linda University, California. Sibonga has more than 30 years of research experience in bone cell biology & physiology at such institutions as the Jerry L. Pettis VAMC, Loma Linda, CA; NASA Ames Research Center; Harvard School of Dental Medicine; and the Mayo Clinic, Rochester, MN.