In today’s A Lab Aloft entry, International Space Station Program Scientist Julie Robinson, Ph.D., continues her countdown to the top ten research results from the space station, recently presented at the International Astronautical Conference in Beijing, China. Be sure to check back for daily postings of the entire listing.

Number two on my countdown of International Space Station research results shows just how versatile the developments we’ve made for space can be when reexamined and repurposed for use on the ground. In this case, robotic assist for brain surgery is giving surgeons a helping hand to save the lives of patients with otherwise inoperable brain tumors and other diseases. I include this example not only as a technology spinoff, but to highlight the fact that it took a lot of research back on the ground to make this a reality.

The aptly named neuroArm technology came from the space station’s robotic arm. The Canadarm was developed by MDA for the Canadian Space Agency. For use in space, the arm needed to be resilient, perform well in doing critical space station assembly tasks without failing, and be able to continue operations while taking radiation hits. These specific traits made this technology ideal to translate for developing a robotic arm surgical assist. Doctors likewise needed equipment that they could trust to function consistently and that could go right inside an MRI and still operate effectively.

The neuroArm allows robotic guidance of brain surgery with keep out zones, such that physicians can remove tumors too close to sensitive areas of the brain for surgery by hand alone. The combination of having the MRI, the robotic guidance and the keep out zones allows the surgeon to do the procedure safely, without impacting the other areas of the brain. It is no wonder that Garnette Sutherland, M.D., University of Calgary, was recognized for outstanding results on advancing neurosurgery through space technology – named a top medical application from the space station for 2012.

The use of neuroArm has led to some extraordinary patient outcomes. The first set of research publications on the clinical trials published recently in the Journal of Neurosurgery for the initial 35 patients; many other patients have now had tumors successfully removed. This is a really exciting technology spinoff that also led to research results back here on Earth that are saving lives.

We are proud to announce the new International Space Station Benefits for Humanity website. Today’s entry highlights how this international collaborative effort communicates positive impacts to life here on Earth from space station research and technology.

This website was translated into all the major partner languages and there also is a downloadable book format. The 28 stories found on the site focus on human health, education, and Earth observation and remote sensing, but these are just some of the benefit areas. Others, such as the knowledge gained for exploration or basic scientific discovery, are found on the space station results and news websites.

It can be a bit challenging at first see which station efforts will generate direct Earth benefits. This is because when we do the research, we finish things on orbit and then it can take two to five years for the results to publish, and possibly another five years after that before the knowledge yields concrete returns. I think each of us, while developing these stories, found things that surprised us. I suspect readers will, too. Some of these developments and findings are so amazing they go straight to your heart!

For example, the Canadian Space Agency robotic technology developed for the Canadarm was really cutting edge; now it has been applied to a robotic arm that can assist with surgery. Brain surgeons have used this robotic arm to help some patients who were not eligible for a standard operation, because the surgeries were too delicate for human hands. With the robotic assist, still in the testing phase, they were able to save the lives of several patients. This is a remarkable development. 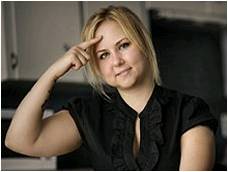 Another area where space technology returns offer a benefit to humanity is in the ability to provide clean water in remote regions and disaster areas. We also have stories about the ability to use station related telemedicine to improve the success and survival for women and their babies, if they anticipate complications during delivery. Providing a remote diagnosis to women in hard-to-reach areas enables them to seek life-saving medical care. These are just a few of the remarkable returns from space technologies. 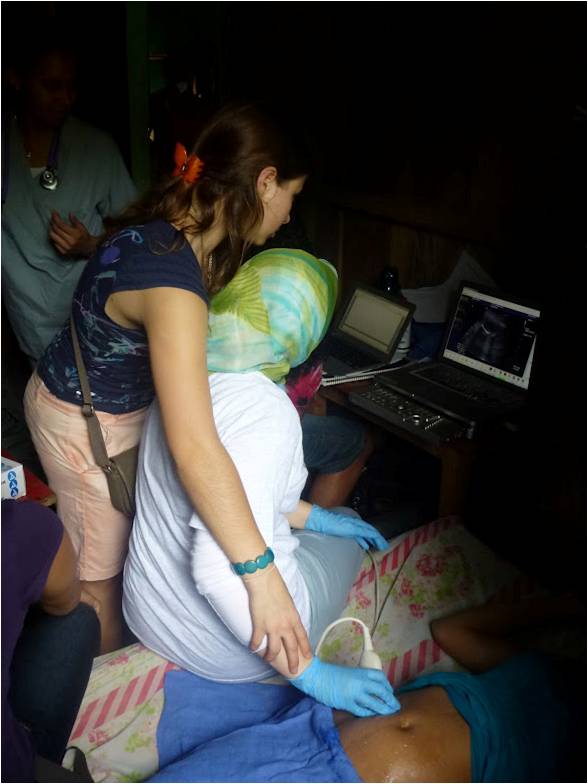 Expectant women around the world can experience safer deliveries in part due to International Space Station technology in telemedicine. (Credit: Scott Dulchavsky)

The website also includes stories that focus on the research knowledge obtained during station investigations. One particular area gaining attention is vaccine development. Scientists are now creating candidate vaccines for salmonella that fight food poisoning, as well as one in the works for MRSA—an antibiotic resistant bacteria that is very dangerous in hospitals. 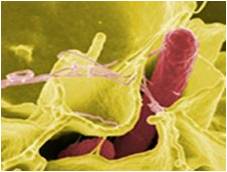 We also see ongoing benefits in the area of Earth observation, which our Japanese colleagues compellingly described after the Fukushima earthquake in Japan. The Japanese people were responding to that event in such courageous ways. Having information about what was going on really helped and the global community mobilized all the possible Earth remote sensing resources to provide aid via imagery of the disaster. The station provided imagery and data of the flooding from the original tsunami surge. I would like to share with you the comments of my JAXA colleague, Shigeki Kamigaichi, who was on the ground after the disaster:

“The Earth observation by astronauts from the International Space Station brought us several impressive image data offerings. Furthermore, the crew comments concerning the tsunami damage from March 11, 2011, to the people who suffered gave us a feeling of oneness and relief.” 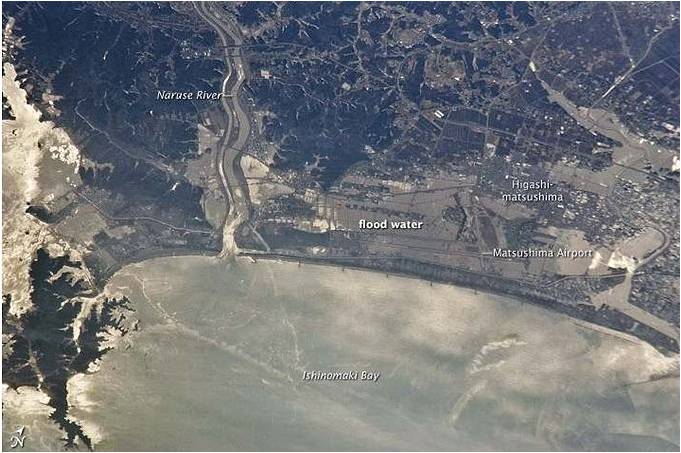 Oblique image of the Japanese coastline north and east of Sendai following inundation by a tsunami. The photo was taken Mar. 13, 2011. Sunglint indicates the widespread presence of floodwaters and indicates oils and other materials on the water surface. (NASA) View large image

One of the exciting things about Earth observations work is that the station passes over populated parts of the world multiple times a day. Our Russian colleagues shared some examples of work they had done to track pollution in the Caspian Sea using data from the space station. They also used Uragan imagery to understand a major avalanche in the Russian Caucasus region, determining glacial melting as the root cause of the avalanche. These imaging efforts really help as we look at ways to better respond and predict disasters and prevent future loss of life. 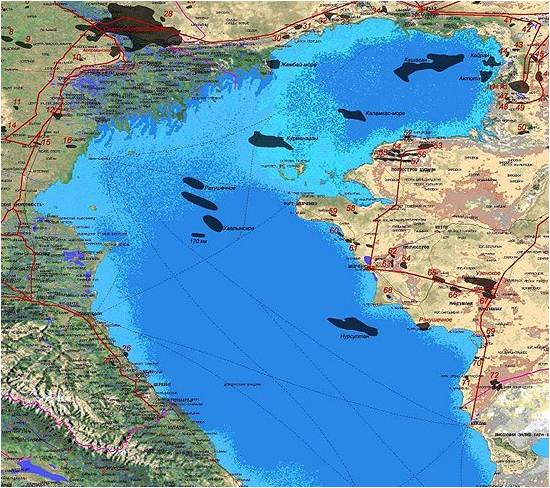 Oil pollution in the northern part of the Caspian Sea, on the basis of data received from the Uragan experiment: 40 oilfields, equaling approximately 10 percent of the surface covered with oil film. (Roscosmos) View large image

Of course, there also are the compelling educational benefits from the space station. It is inspiring to see students get excited about science, technology, engineering and math, simply by connecting them to space exploration. Education is a bonus, since this is not why you build a laboratory like this. Once you have that laboratory, however, you can make a huge impact in children’s futures.

One of the most widely influential examples of educational benefits are when we hear students from all over the world, not just station partners, using HAM radio contacts to speak with astronauts aboard station. This happens on the astronauts’ free time, when they can just pick up the ham radio and contact hundreds of students through amateur radio networks. These children ask questions and learn about everything from space to life aboard the station to how to dream big. It is a recreational activity for the astronauts, taking just a few minutes, but the students are touched for a lifetime.

Because this effort is so readily routed internationally, students in developing countries can benefit just as easily as students in other areas. In fact, 63 countries already have participated with the space station; a much larger number than the 15 partner countries. Education activities are a core international benefit.

A student talks to a crew member aboard the International Space Station during an ARISS contact. (Credit: ARISS) View large image

While this initial launch of the Benefits for Humanity website was a big release, it is something we plan to maintain and continue over time with our partners. The work for these derivatives of station activities will continue to roll out over time, but we anticipate it to grow. When you have hundreds of experiments active during any six-month period on orbit, the throughput and the amount of crew time going to research each week is unprecedented!

The experiments are being completed faster than ever before and we are going to see these benefits and results coming out much more quickly, so it is an exciting time. It is important to start talking about these developments as we turn the corner from assembly to the full mission of research aboard this one-of-a-kind orbiting laboratory.

I often have the opportunity to do interviews with reporters who are interested in the kind of research happening on the International Space Station. Sometimes they are veteran space reporters, other times they are new and just learning about space research for the first time.

Regardless of their past experience, they often ask me for evidence that research on the space station is worth the cost. It is a simple question, but a misleading one. This is because it counts every penny on the cost side, but fails to account for the multiple benefits in addition to research results: international cooperation, engineering accomplishments, and research accomplishments.

The space station already benefits the country and the world through its construction and operation—even if it were never used as a laboratory, this would still hold true. We should not lose track of the power of daily international cooperation in constructing, operating and using the space station. The fact that this cooperation is on the cutting edge of space technology and for peaceful purposes amazes the previous generation, but is business as usual for us today. I work closely with colleagues at the main partner agencies, including Russia, the European Space Agency, Japan, and Canada; over 59 countries have participated in space station research or education activities through 2010. 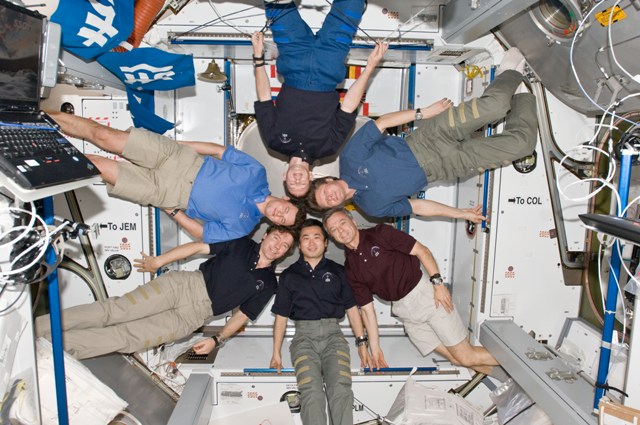 The value of the space station as an engineering accomplishment should also not be underestimated. Common standards allow parts manufactured all over the world to interchange and connect flawlessly the first time they meet in orbit. Year round operations, 24 hours a day, 7 days a week, have now extended for 11 years, and we have more than a decade ahead of us. The various life support technologies developed for station provide redundant capabilities to ensure the safety of the crew. They also provide technology advances that benefit people right here on Earth—for example, new compact technologies provided water purification after earthquakes in Pakistan and Haiti. 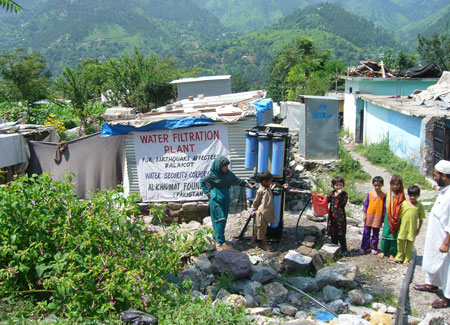