The STS-133 shuttle flight, which launched to the International Space Station on February 24, 2011, includes 5 investigations for crewmembers to perform, delivery of 24 studies with hardware or samples, and 22 investigations with samples or data coming home on the return trip. Allow me to share with you a few of the highlights from this extensive list.

A major milestone from this flight is the final outfitting of the interior of the space station laboratory. NASA launched the last of the Express Racks on STS-133. These workhorses are bench-like structures used to support experiment equipment with power, data, and thermal sensors. The final addition of Express Rack 8 completes the furnishing of the laboratory, making way for full use of the station for research. Future National Lab users will employ about 50 percent of the space available in these racks, doing research that will benefit discovery and economic development of the nation through 2020 and beyond.

Cytokines on a Mission

This flight also includes a unique experiment that will study the very puzzling effects of spaceflight on the immune system. The Effect of Space Flight on Innate Immunity to Respiratory Viral Infections investigation looks at the impact of microgravity on the immune system by challenging it with respiratory syncytial virus (RSV). These studies will help determine the biological significance of space flight-induced changes in immune responses, which astronauts experience in microgravity. NASA and the National Institutes of Health (NIH) are both interested in using the space station to understand the immune system for astronauts and for the health of people here on Earth.

The first premier boiling facility, the Boiling eXperiment Facility (BXF) also launched on STS-133. This equipment enables the study of boiling in space, paving the way for two new investigations to take place on station: Microheater Array Boiling Experiment (BXF-MABE) and Nucleate Pool Boiling Experiment (BXF-NPBX). The boiling process is really different in space, since the vapor phase of a boiling liquid does not rise via buoyancy. Spacecraft and Earth-based systems use boiling to efficiently remove large amounts of heat by generating vapor from liquid. For example, many power plants use this process to generate electricity. An upper limit, called the critical heat flux, exists where the heater is covered with so much vapor that liquid supply to the heater begins to decrease. The goal of BXF-MABE is to determine the critical heat flux during boiling in microgravity. This will facilitate the optimal design of cooling systems on Earth, as well as in space exploration vehicles.

Without buoyancy or convection, boiling fluids behave quite differently in space.
(Video courtesy of NASA)

The second experiment, BXF-NPBX, studies nucleate boiling, which is bubble growth from a heated surface and the subsequent detachment of the bubble to a cooler surrounding liquid. Bubbles in microgravity grow to different sizes than on Earth and can transfer energy through fluid flow. The BXF-NPBX investigation provides an understanding of the heat transfer and vapor removal processes that take place during nucleate boiling in microgravity. This knowledge is necessary for optimum design and safe operation of heat exchange equipment that uses nucleate boiling as a way to transfer heat in extreme environments, like the deep ocean for submarines and microgravity for spacecraft.

Also on this flight are some great new combustion experiments. Burning and Suppression of Solids (BASS) tests the hypothesis that materials in microgravity burn as well, if not better than, the same material in normal gravity, all other conditions being identical. Structure and Liftoff In Combustion Experiment (SLICE) investigates the characteristics of flame structure, such as length and lift, using different fuels with varied levels of dilution. SLICE uses a small flow duct with an igniter and nozzle to collect data as a flame detaches from the nozzle and stabilizes at a downstream position. Combustion is dramatically different in space, as seen in the photo below. These studies aim to make spacecraft safer from fires and combustion processes more efficient in microgravity.

A flame in Earth’s gravity (left) vs. microgravity (right).
On Earth, warm air rises and cools, leading to the shape of
the orange flame. In space, there is no buoyancy, so the
flame is blue-hot and spherical.
(Image courtesy of NASA)

Not So Lost In Space

One of the more publicized technology demonstrations on STS-133 is a humanoid robot that seems like something right out of a sci-fi movie. Robonaut serves as a springboard to help evolve new robotic capabilities in space. Over the next few years, tests of this technology on the space station will demonstrate that a dexterous robot can launch and operate in a space vehicle, manipulate mechanisms in a microgravity environment, function for extended duration within the space environment, assist with tasks, and eventually interact with the crewmembers. 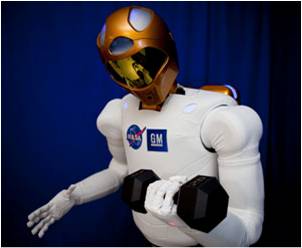 I am eager to see the results from the various studies beginning, ongoing, and returning from the space station via STS-133. This is an exciting time of full utilization of our laboratory in low Earth orbit!

For a full list of experiments available on this flight, see the STS-133 Press kit or visit https://www.nasa.gov.