The Parker Solar Probe is in the news everywhere! 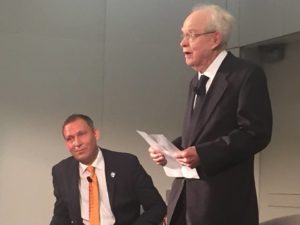 Prof. Eugene Parker at the University of Chicago is a truly amazing scientist with an overall impact for the Nation’s space program that is rarely matched. Looking at the current NASA mission lists, we have more than 10 missions today we are working on or flying for which Parker has done foundational work.

I was therefore really excited to be a key contributor to the effort that renamed Solar Probe after Parker – he had predicted the solar wind and its magnetic field in the ’50s before it was experimentally confirmed. But, what happened at this renaming event really was not only a home-run, but a ball flying two, three blocks beyond the stadium! We had expected this to be a rather local event and I therefore decided to move the event to the University of Chicago, so he could attend and the community could celebrate him. I called up the president of the University to ask whether he would be willing to partner, and he was.

The rest of the story is pretty much about Nicky Fox and her team at APL, Steven Clarke & Dwayne Brown and their teams at NASA HQ, and a superb PR crew at U Chicago, who came together as one and put a program together that included public talks in Chicago, a Parker Solar Probe tech and science exhibit.

The renaming ceremony which was standing room only, included around 10 TV cameras, radio and written press. You have seen the story on TV all around the world – the story we assumed would be local, turned global. We were live on NASA TV (https://www.youtube.com/watch?v=jRyKWzTT6kg) and within a couple of hours of the event it was on Swiss TV (I know because I got texts), it was on US National TV, and many stations everywhere. I heard from John that the local Chicago stories entirely focused on Gene, which is exactly what we hoped for. But, many stories focused on the mission that Nicky so well described. It is the “coolest, hottest mission” ever done, “a mission of extremes”, and one that only happens because of a team coming together as one and working harder than they ever thought they could – the Parker Solar Probe.

I was so happy to work with Steve to give Parker the NASA Distinguished Public Service Medal, the highest recognition given by NASA to non-government employees. He will also forever be the first living human ever with a NASA mission named after him!

I want to thank all the Parker Solar Probe PIs (Justin Kasper, Stuart D. Bale, Marco Velli, Dave McComas, Russ Howard) for making this event a priority. I also appreciated seeing Stamatios Krimigis there, without his effort there would be no Solar Probe today, and Thomas J Bogdan, one of Parker’s students, who took this picture.