What can Ernest Shackleton teach us about leadership in ambiguous and ill-defined times, such as during a government shutdown? During the past month, I have been thinking a lot about the story of Shackleton, one of my favorite leadership stories I have ever read.

A brilliant explorer and seafarer, Shackleton is best known for his leadership during his failure to achieve his goals. When his exploration got into trouble and the Antarctic sea and ice tore apart his ship, he lead his team to safety using a series of techniques that remain relevant today. First responders, military and other emergency leaders I have talked to have often told me about these techniques as well. 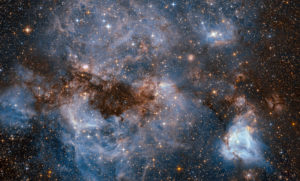 This shot from the NASA/ESA Hubble Space Telescope shows a maelstrom of glowing gas and dark dust within one of the Milky Way’s satellite galaxies, the Large Magellanic Cloud (LMC).

The challenge, of course, is to lead during a time that is ambiguous or even chaotic. Here are some of the techniques that I use during such times of ambiguity and challenge, and which Shackleton has masterfully demonstrated.

#1 Stay focused on the goal! Through regular communications consistently focus on the goals at hand. NASA Science is equally important whether or not there is a government shutdown. When working with our teams, we focus on that, focusing forward and upward.

#2 Stay focused on the team! Everybody deals with pressure and worries in different ways, and Shackleton knew that. To focus on his team, he used various techniques, but most importantly created opportunities for the team to connect and build each other up. We were deliberate about this during the past month, reaching out. Only last week, did we have an informal get-together in a bar and a significant fraction of our team – civil servants and contractors – showed up and were there for each other.

#3 Lead tighter to create more certainly where that is possible. Shackleton knew that emptiness, boredom, and ambiguity can rapidly give way to desperation and hopelessness. To keep his men busy, he made up a regular and strict schedule and even an Olympiad of sorts in which two teams were competing against each other. Our leadership team worked consistently and coherently through a series of teleconferences and meetings that were run the best way we could during this time, and focused on creating the best status quo, but also focused towards the most effective way to bounce back once we were going back. Guessing from my many emails, texts, and statements to me, this leadership technique Shackleton used still works today.

#4 Communicate what is happening, do so truthfully and consistently. A key element of Shackleton’s challenge was to recognize that food needed to be rationed increasingly and hard decisions needed to me made as things became more desperate. To build a resilient and successful team, the trust that comes form such communication is not only good to have but absolutely necessary. It may be counter-intuitive, but this trust comes particularly from sharing and managing bad news, factual and accurate – not with emotional and sarcastic overtone, but reflecting a trusted leader!

#5 Be a relentless advocate for hope. In the darkest times, when it looked like the crew was doomed, they were working up plans for the rescue! At times, these activities may have felt a little bit unreasonable. Why do we plan for this now? What is the likelihood we will use this solution? We have worked on a number of startup plans these past few weeks. We will be better next week for it. And no, not all of the plans will be 100% useful as we worked on multiple scenarios.

My favorite part of Shackleton’s story is what happened months and years after their emotional and unlikely rescue. Being a seafarer and explorer at heart, he put together a new expedition and asked from volunteers. And guess what – of the crew stuck out there on the ice, nearly freezing and starving to death – most if not all volunteered again! Most people who have seen true leadership immediately understand – they would rather be part of a great team in horrific circumstances, than part of a horrific team in great circumstances.

We are hiring a number of people right now to be part of our team. I hope they see on our team what we see: a group of great individuals who are coming together with their strengths and weaknesses to learn and excel because what we do in importance by far exceeds the challenges that we face in our environment that is sometimes unpredictable and ambiguous und illogical. I am sure I feel like so many of our team-members: we can’t wait to go back to work full-time!

Here is one favorite books on this story: https://en.m.wikipedia.org/wiki/Endurance:_Shackleton’s_Incredible_Voyage?fbclid=IwAR1R-70ewtKugwJi0Y-4Mb9330v59_lATwu5JR1W0mVaB3lT2OuoYL3aBhU