Last week, Mike Freilich, the director of NASA Earth Science retired after dedicating a dozen years of his life to NASA Science. Mike has been truly excellent and he has already won all kinds of awards, and will hopefully win even more. He is credited with turning around a failing science program and creating a program with vitality and excellence. But his retirement made me think: Mike is a lot better than most people know. Let me explain.

Here is something I learned during the last 2.5 years in government, which would have changed how I felt and talked about Mike and others who worked within the government in the previous decades, especially civil servants in leadership positions.

There are two ways NASA leaders have value. On the one hand they do good things, on the other hand they prevent bad things from happening.

The first bucket of actions are what earns applause and recognition. There is a new mission, a launch, a discovery and societal impact like better weather forecasting. It is what award citations are made out of, honorary doctorates, etc.

The second bucket – the actions that prevent bad things from happening – is far less glamorous. It is often full of disappointments and challenges, and there is not one thank you or recognition for it.

Some of this hidden work relates to hard decisions that are made to protect the program and the greater good. To protect the viability of NASA’s science program, we need to sometimes stop activities that under perform. Sometimes, such tough decisions come from constraints that are not obvious. But, in all cases I have observed or have been part of, these decisions are made to protect NASA Science and for the health of the community. But, there has never been an award given for cutting back a mission with bad financial or technical performance, even though such an action is in every way as important as starting a new mission because it is the only way to maintain a balanced program of excellence.

There is another way NASA leaders add value, which is by preventing bad things from happening. This is done through discussions and negotiations with various government stakeholders, a game with ever changing rules but big consequences for all. For example, within weeks the 2020 budget proposal will come out. Do not forget: prior to that release, lots of work occurred, work nobody will ever know. It is tough work, sometimes taking over weekends and family time of the dedicated individuals who are tasked with it. And recognize there are many often scary threats that did not materialize because of the hard work of these leaders.

If I had to estimate the value Mike had for NASA Science in “do good”, vs “prevent bad from happening”, I would think the ratio may be 25:75 in favor of the second category. And, you should not be surprised if many of Mike’s colleagues, including me, score in very much the same way.

People on the outside of the agency often miss that, perhaps they sound off sitting in a tenured university position like I used to, and do not see or understand 75% of the value a given person is adding for their own benefit. They are in every way as wrong as I used to be.

With that, I want to thank Mike for his honorable service – all 100% of it- and wish him the best for whatever is next for him. I am attaching a picture of Mike in tears, signing the launch vehicle of ICESat2, the last mission he launched as director of NASA Earth Science. 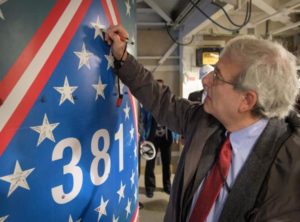 We will miss Mike, but I want to thank all of the members of our NASA Science leadership team for their service and hard work! Let me ask you a favor: when you see them next, please thank both Mike and the other leaders for their dedication and service to the benefit of many!