Skip to content
On October 16, NASA launched “my first mission”, the Lucy mission to the Trojans, a hitherto unexplored population of ancient building blocks of our solar system. It was an amazing launch!
Let me explain why I call it “my first”: From the decision to fly a mission and/or selecting it for flight, there is about 4-5 years until that mission is ready to leave this planet and launch into space.
Until today, all missions launched into space since since I started working at NASA were essentially defined or started before I joined the team. No matter what I thought of them, I lived with prior choices made without any of my initial input. 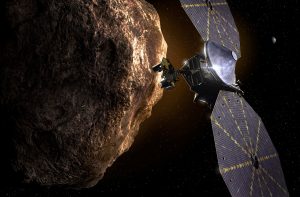 There are many truly exciting missions in this category, such as two landings on Mars, seven missions focused on our most beautiful planet Earth, the Parker Solar Probe, the James Webb Space Telescope getting ready for launch later this year, and many more.
I loved working on these marvelous missions. But, even though I tried to consciously stay away from that, I noticed that (at least in my head) I had a tendency to blame some problems/issues with them on “prior decisions”. I comforted myself sometimes with an assertion that I would have predicted certain challenges and would have addressed issues immediately, making thing better and easier for our mission teams.
Well, I now live with the good, the bad, and the ugly of total accountability with the missions I either selected or managed to get into the budget for the first time. With these decisions, I have no excuses, not even in my head.
There is good (or even great!) like today’s launch of Lucy, exactly on schedule like we imagined it in late 2016 when I made the decision. I had put a lot of effort into trying to understand the leadership team and mission. I must say I was wrong in the sense that I thought they would do well, but they did much better than I thought! It has been inspiring to watch them gel into an incredibly effective team. I thought the science was incredibly compelling and it will take 12 years for the team to harvest that. Make no mistake – there is still a long path to go, but I feel good about it based on what I saw thus far.
I also selected IXPE, an x-ray astrophysics mission and managed to get DART into the budget, both slated for launch later this year and doing well!
And then there are some bad things. For example, I thought I could overcome some systemic issues holding us back through improved decision making or implementing new leadership ideas. Well, some of our new ideas did indeed work, but giving myself a “good” across the board would be grade inflation still.
And finally, there are a few decisions I would file into the “ugly” category. Over time, I observed that decisions in this category seem to have some common sources. For example, I have gotten projects into trouble because I failed to identify or massively misjudged either a hidden political or long-held cultural influence. I think of these like dark matter in the universe – just because we cannot observe it directly does not make it any less real.
During the past years, I have learned – despite progress in many areas – that some things are just harder than I guessed. I am also even more appreciative of the many great “prior decisions” leaders have made before I joined NASA. And I am proud of our team as the vast majority of our missions are in the “good” category. 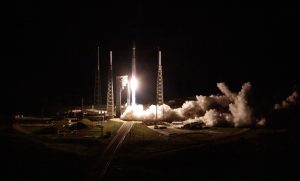 Photo Credit: (NASA/Bill Ingalls)
I am still in awe about the most amazing launch this morning, as the Atlas V took off the launch pad in a bright light and massive thunder and moved it from earth into its exciting orbit between the planets that will surely make history yet again. One of the best teams I have observed anywhere willed this mission into being, on schedule and below cost, despite COVID.
Although this mission is nowhere near over, and problems surely will arise as they always do, I am already quite certain: This was an excellent selection – I am glad I made it, and I thank our team for their leadership and support!