In many popular movies scientists are cold, analytical men and women who run almost exclusively on the left side of their brains. Often, scientists and engineers are considered loners and the successful ones do not make mistakes.

I believe that such perceptions are not only dead wrong, but also discouraging to those who are thinking about their futures. “Who wants to work alone? Who is good enough to enter careers where perfection is needed? Not sure – but certainly not me!”

I spent this week, in part, at JPL bidding adieu to NASA’s Opportunity, which – together with Spirit – formed the Mars Exploration Rover mission. This mission started at the edge of disaster: JPL has two Mars mission failures in a row, putting its very existence at risk. 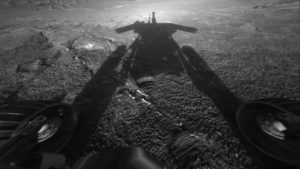 The Mars Exploration Mission was an attempt of a turn-around, a 3 year crash program targeted at re-establishing excellence. Lead by Pete Theisinger, a space legend and manager, and Steve Squyres, a youthful Cornell Prof and science lead, an exploration team was assembled.

It was a huge success when first Spirit and weeks later Opportunity responded from the surface of the Red Planet. The missions, initially designed to last 90 days each and good for 1 km of driving, exceeded their mark manyfold. Opportunity drove longer than a marathon and lasted over 55 times longer than designed. And these missions changed entirely how we think about Mars now.

By any measure, this exploration team is one of the very best and most successful. Yet, if you try to find the stereotypical engineers and scientists I described earlier, you will be disappointed.

Many remember the pure joy and elation at the beginning of the mission. The team members were deeply passionate and excellent during this mission. They decided to forego the proprietary phase of their schedule and directly released the data that came down from Mars – to the elation of millions worldwide. Joy, inspiration and love were words heard in pretty much any science meeting focused on this.

But, what struck me is how the end of the mission felt.

The team was prepared: Spirit was lost years ago, and Opportunity had been silent for 8 months due to a dust storm, even though the team sent over 1000 commands to wake it back up. It was my job to decide when it was over. We pulled the team into a room on Tuesday and told them that we would try one more time and – if not successful – I would declare the mission complete on Wednesday.

This session felt like a memorial to a loved family member. Tears were flowing freely as scientists and leaders shared their memories and told each other how much they loved being part of this team – with two robotic emissaries on Mars.

Men and women of all ages talked about their passion, their worries they they would lose contact with the team that became family to them. They reminded each other of challenges, near-death experiences their missions overcame – by them working together. They were vulnerable, often dissolved in tears, and visibly touched, but deeply proud.

Many team members came to the command center in the evening. Squyres chose the last wake up song – Billie Holiday’s “I’ll be seeing you”. The team was there and talked about common experiences, about love – the raw emotion of individuals who put their heart and soul into something that gives purpose and a sense of community. The picture below shows Steve and I in the ops center as the final commands are sent out. 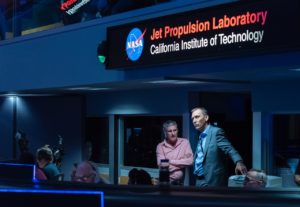 No, these are not left-brained analysts who work alone. I am sure there are introverts and extroverts, but they work together, passionately.

Great, history-making science of the type we do at NASA is a team sport, a deeply emotional affair. Exploration is about individuals with mistakes and deficiencies coming together and struggling, transcending their limitations to create something that is as close to perfection as it can be.

I wish we could explain that to children and to their parents.

Merriam-Webster Dictionary defines “opportunity” as a favorable juncture of circumstances, or a good chance for advancement or progress. To me, Opportunity’s legacy embodies the name she was given. This rover, along with its twin – Spirit – not only gave us a better understanding of the Martian landscape and its history of water, but significantly improved our knowledge about how to navigate on other planets – something that will help future robotic and human exploration of Mars. 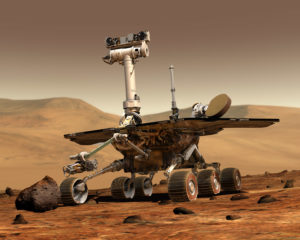 Opportunity can arise when we least expect it, or it can be a product of hard work and preparation. In the case of the Mars Exploration Rovers, it’s both. NASA’s robot geologist duo, Spirit and Opportunity, landed on the Red Planet in 2004 with the goal of searching for clues of ancient water activity on Mars. While the missions were prepared down to the very last detail, the unexpected opportunity arose when both rovers exceeded their planned 90-day mission lifetimes by many years.

Spirit lasted 20 times longer than its original design and sent its final communication to Earth on March 22, 2010. Twenty times longer! That’s incredible. Even more impressive is that Opportunity continued to operate for more than 14 years after landing on the Red Planet. Eventually, all missions operations come to an end and their legacy is used as a foundation for future missions of exploration.

As we reflect onOpportunity’s legacy, I’m reminded of my fondest memory of its mission – its first encounter with Mars. I was a professor at the time and was so excited about the incredible feat humanity was about to attempt: bounce onto the Martian surface with the rover inside a landing craft protected by airbags. The week before landing, I showed my class an amazing animation of the intense landing that was ahead. I wanted them to realize how difficult this endeavor actually was.

The night of landing I was alone in my living room with a laptop watching the NASA livestream of the Space Flight Operations Facility. You could there was an eerie silence in the room – each person waiting, listening, hoping. You could almost feel their energy through the screen, and then…confirmation! The room busted at the seams with joy and tears of happiness and relief. Humanity just accomplished a nearly impossible feat and I am so thankful I was able to witness it in real time.

Last night, the team made their final attempt to contact the rover. I was in the room when the command was sent – this time felt much different than the last. There was a heavy feeling in the air, which was filled with many team members, some of which have spent a majority of their careers assisting this rover as it explored a planet more than 33 million miles away. The humans behind the robot. Secretly we were all wishing that Opportunity would suddenly wake up and ping us back. That did not happen, as we all expected.

Farewell, Oppy. Thank you for all the science.