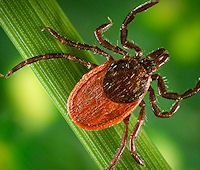 Finding a tick usually involves a squeamish self-examination — carefully rubbing fingertips through your scalp, meticulously scanning your body, and groaning “eyeww” if a little bloodsucker is discovered. But now there is a new way to discover these pesky, disease-laden critters — via satellite!
Two University of Alabama at Birmingham graduate students are pioneering the new technique as part of a NASA program called DEVELOP. They’ve been using satellite images of Alabama’s Talladega National Forest to reveal likely areas of the forest where ticks may flourish. The students used what they learned from their NASA advisor, Dr. Jeff Luvall of NASA’s Marshall Space Flight Center in Huntsville, to classify levels of vegetation and moisture in 12 locations in the forest. They then created detailed digital maps and images showing likely tick habitats — areas where dense vegetation overlapped those with high soil moisture.
If you want to know more about the program, visit: http://science.nasa.gov/science-news/science-at-nasa/2010/04may_ticksat/
To read about other uses for NASA satellite imagery in education visit http://landsat.gsfc.nasa.gov/education/
Link to the NES Virtual Campus home page.