Skip to content
A stream of meteors believed to be leftovers from Halley’s Comet is expected to streak across the skies this week, but a full harvest moon will compete for attention and may obstruct some of the show. 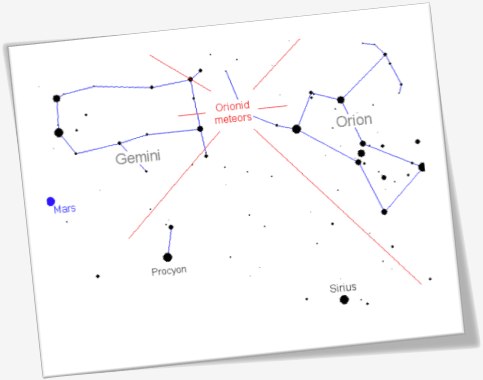 The meteors are called the Orionids because they appear to shoot from the second-brightest star in the Orion constellation, or from the hunter’s elbow. On Oct. 20-22, observers in the Northern Hemisphere may see around 20 meteors per hour at maximum, while observers in the Southern Hemisphere may see around 40 meteors per hour. The radiant of the shower will be observed north of Betelgeuse, the brightest star in the constellation Orion, the Mighty Hunter.
The annual show usually happens from Oct. 17 to Oct. 25, and this year it’ll peak before dawn on Thursday. But that’s also when a full moon will appear over North America, perhaps dimming the light of the meteors. So the best viewing times should be earlier in the week, when the moon isn’t as bright. The best places from which to view the meteor shower are in locations with no light pollution.
For more information, visit http://science.nasa.gov/science-news/science-at-nasa/2009/19oct_orionids/.