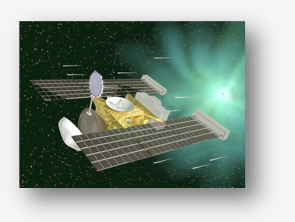 On Feb. 14, 2011, NASA’s Stardust-NExT (New Exploration of Tempel 1) mission will encounter Comet Tempel 1, providing a unique opportunity to measure the dust properties of two separate comets (Wild 2 and Tempel 1) with the same instrument for accurate data comparison. The encounter also will provide a comparison between two observations of a single comet, Tempel 1, taken before and after a single orbital pass around the sun. 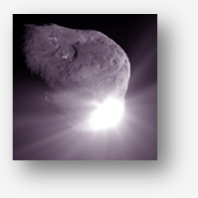 NASA’s Deep Impact mission observed Comet Tempel 1 in the summer of 2005, as the comet was inbound toward the sun on its approximately 5.5-year orbit between Mars and Jupiter. Deep Impact’s primary mission was to deliver a special impactor spacecraft into the path of Comet Tempel 1. The spacecraft — and many ground-based observers — observed the impact and the ejected material. Scientists were surprised the cloud was composed of a fine, powdery material, not the expected water, ice and dirt. The spacecraft did find the first evidence of surface ice on a comet instead of just inside a comet.
The Stardust-NExT mission is a low-cost use of an in-flight spacecraft redirected to a new target. Prior to its tasking for Tempel 1, the Stardust spacecraft successfully flew through the cloud of dust surrounding the nucleus of comet Wild 2 in January 2004. The particles of cometary material gathered during this flyby were then returned to Earth aboard a sample return capsule that landed in the Utah desert in January 2006.
Mission website.
Background on comets.
Link to the NES Virtual Campus.
Listen to a podcast about Stardust.

One thought on “A Valentine's Day Return to Comet Tempel 1”