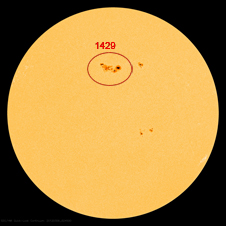 Every day our Earth experiences storms of all kinds including one type of storm that we often don’t realize we are experiencing — a solar storm. Thanks to our protective atmosphere and magnetic field called the magnetosphere, we’re safe from the dangers of solar storms.

On March 8, 2012 at 10:53 p.m. EST the sun erupted with an M6.3 class flare, and about an hour later released a coronal mass ejection or CME. These eruptions came from active region 1429 that has so far produced two X class flares, and numerous M-class flares.

NASA’s Space Weather Center models measure the CME traveling at speeds of over 700 miles per second.