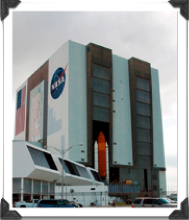 The Vehicle Assembly Building, or VAB, at NASA’s Kennedy Space Center in Florida is undergoing renovations to accommodate future launch vehicles. Space shuttle-era work platforms have been removed and accommodations are being made to support a variety of future spacecraft, including NASA’s Space Launch System heavy-lift rocket. The changes are part of a centerwide modernization and refurbishment initiative in preparation for the next generation of human spaceflight.

One of the largest buildings in the world, the VAB was constructed in the mid-1960s to support stacking of the Apollo Saturn V rockets that took American astronauts to the moon. In the late 1970s, the facility was refurbished to accommodate the space shuttle.

To read more about this renovation, visit https://www.nasa.gov/exploration/systems/ground/vab_platforms_removed.html.