What a week, one of my favorites during my nearly six years at NASA! It was such an amazing week because it was the culmination of decades of determination and overcoming challenges that led to one of the biggest and unquestioned successes. 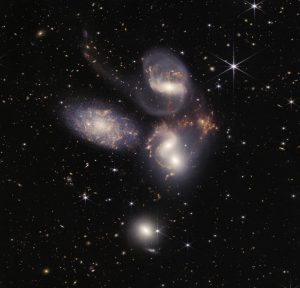 Years of hard work and the efforts of thousands of people across the globe led us to the release of the first full-color images from NASA’s James Webb Space Telescope on July 12. The reaction from people around the globe was incredible. To give you an idea, between July 11 – 14, there were over 1.4 million social media mentions of the Webb Telescope, and the topic was the top Google search in the United States! The story of Webb’s images reached so many; it was on the front page of 83 domestic newspapers and 45 international. There were nearly 10,000 traditional media stories written about the images, and over 1,500 TV stations covered the news.

Reflecting on this achievement, I am left feeling grateful and humble to have had a role in this moment in history. There are few times in history when we humans look at nature in an entirely new way, and Webb has already begun to make us do this with these new images. How amazing is it that we are alive right now and we are poised to gain new insight into the very foundation of our existence!

The deep gratitude I have is to the many individuals who enabled this mission and brought it to fruition. From the technicians to the scientists, everyone involved has given their best, worked extra hours, prevailed through hardship and have inched us closer to rewriting our cosmic history.

I could not be more proud of the Webb Team and everyone involved who has gotten us to where we are today. Thank you.

Now, the curtain is lifting on a new era of our cosmic story. Webb’s first full-color images are a reminder that we are but a small dot among billions of galaxies in the universe. Until now, we have never had the eyes to see the infancy of the universe, Webb is providing us with that vision in unprecedented detail. We are seeing details, stars and galaxies that humans have never seen before. What we are seeing is truly revolutionary. 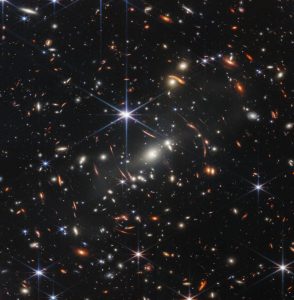 To me, each of the images is a victory on its own. For example, the deep field with only 6 hours of integration immediately found galaxies older than 3 billion years – surely the “oldest galaxy” record is about to fall. What is more exciting to me that we also have compositional spectra of these galaxies. Modelers of star-formation and star-generations will have constraints previously inaccessible. But, I always try to look at pictures in two ways – as a scientist, but also just like observing nature or art like a child.

With that, looking at the Southern Ring Nebula and the Carina nebula is just stunning. Yes, it is about the story of star formation and the end of stars, but it is just incredibly beautiful and stunning even without the scientific explanation. Nature is beautiful, much more beautiful than we ever thought. 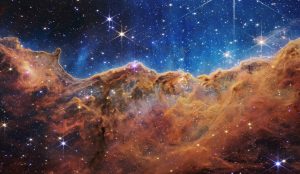 Finally, I loved the exoplanet spectrum – a Jupiter scale planet closer to its star than Mercury – and immediately water signatures show up with remarkably tight error bars. I can only imagine the charts we are going to look up in the whole spectrum and how we are going to learn about atmospheric composition of worlds that may or may not have the promise to harbor life.

As humans, we are intimately connected to these images. As I write this post, I look down at the gold and platinum rings on my hands and remember that these elements were likely created from merged neutron stars. Leftovers of stellar evolution – on my hand. Stellar processes and explosions of various kinds created the very elements we are made of as humans. We are made of star dust. With Webb, we’re going to peer through cosmic dust and see stars forming and dying in stellar explosions that eject material that seed new stars to be born. A violent cycle, but one that is essential.

We had seen before with Hubble that these star forming regions are stunning and provide us with enormous amounts of learning. Now, with Webb, we are looking at these stellar nurseries in new detail that will reshape how we understand the evolution of galaxies.

We are just beginning to write this next chapter in our cosmic history books and I could not be more excited to see what story Webb helps us tell. The fact that we can look into the universe and use what we learn to change the way we think about ourselves is one of the most profound things science can do.

It gives me hope to witness the power of humans as they achieve greater things in the face of adversity and create the impossible together. Thank you for joining us in this journey to unfold the universe.