This week, comments from guest blogger Dr. Scott M. Smith as he reflects on recent space station research, which connects a diet rich in fish intake and omega-3 fatty acids to a reduced rate of bone loss.

Scientists spend a lot of time discussing their work in proposals, manuscripts, and meetings, but Eureka! or light-bulb-going-off moments are amazingly rare. Our Nutritional Biochemistry Lab at NASA Johnson Space Center, however, was fortunate enough to have one of these moments recently.

Our lab’s Eureka! moment actually started a few years ago when we submitted a proposal to look at omega-3 fatty acids as a countermeasure for the muscle loss caused by space flight. Omega-3 fatty acids have been shown to help stop muscle loss in cancer patients; we believed the sub-cellular mechanisms of the two types of muscle loss are similar. In theory, if it works for cancer, it should work for space travelers. Although that proposal was well scored, funding was short that year and our experiment did not make the cut. 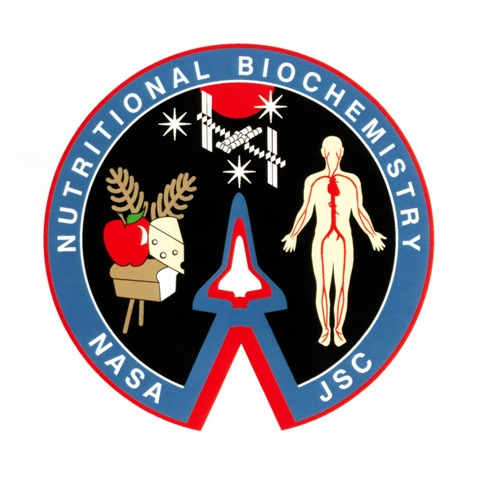 The Eureka! came when we were in a meeting reviewing another bone loss countermeasure that was tested during bed rest. Unfortunately, despite high hopes going into the study, this method was not working. As I rolled this around in my head, it seemed to me that nothing to date had worked at slowing bone loss. We had tried exercise and other physical countermeasures with limited success and, although drugs are available, there is not a drug out there without side effects.

It was during this reflection that the light bulb went on. Eureka! I realized that our bed rest studies had included a menu that was pretty loaded with fish, which is a great source of omega-3 fatty acids. This was done to help increase the vitamin D content of the diet, a very important factor. As I thought of ways to investigate my hypothesis, I realized I had some challenges to face in gaining specific data on omega-3 fatty acid intake. It is not easy to find volunteers to literally spend a few months in bed, let alone subjects who are willing to participate in the bed rest and also forego eating fish.

We then took the next logical step, to see if the diet of astronauts was related to their bone breakdown. We track dietary intake of astronauts during space flight using a food frequency questionnaire or FFQ. This tool monitors the intake of seven key nutrients: energy, fluid, protein, calcium, iron, sodium, potassium. The FFQ is designed to measure only these specific things, so if we wanted to measure anything else, we would typically have to modify how we grouped the foods in the questionnaire.

Instead of redesigning the tool, we took a leap and looked at fish intake in the diet of the International Space Station crewmembers. Given that we did not have the detailed omega-3 fatty acid content of all space station foods, and given that we did not sort out the fish by those rich or poor in omega-3 fatty acid content, this was admittedly a stretch. When we compared the relationship between reported fish intake in crewmembers and their bone loss after flight, however, we found another significant relationship. Those who ate more fish lost less bone. This was awesome stuff! It was one of those rare times in a scientist’s career when unrelated pieces of information actually built into a complete story.

This story did not end, though, with these findings. What we had at this stage was what is called correlational evidence. The two factors—fish intake and bone loss—were related. This does not directly prove a causal relationship, however, and could be nothing more than coincidence or indirect effect. For example, those who ate more fish probably ate less meat, which we also conjecture is bad for bone health. What we need now is a controlled study, where we track and control intakes throughout a space mission, with one group eating a high omega-3 fatty acid diet and others consuming a low or “control” omega-3 diet. By comparing the data from such a study, we can detect differences in bone loss. We have submitted this proposal and hope an opportunity arises in the near future to carry out the experiment.

This research not only has clear benefits for astronauts, but also significant implications for those of us on Earth. These types of relationships—between fish and bone—have been observed. Given the much slower rate of bone loss on Earth, however, makes effects more difficult to pinpoint. Microgravity research can amplify the impacts, providing new knowledge that may benefit those suffering from bone loss. This is just another example of where the space station provides an out-of-this-world platform for human research! 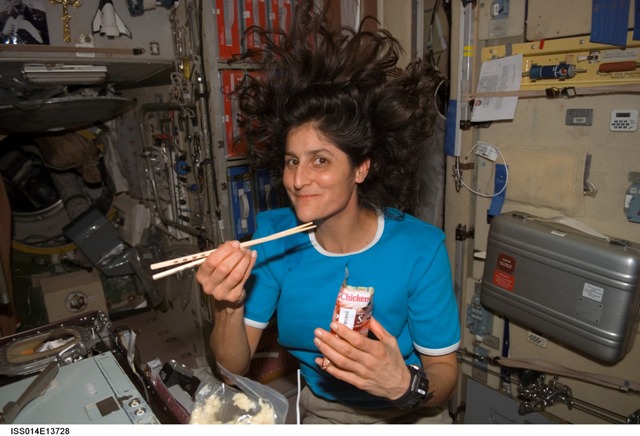 Astronaut Suni Williams eats a meal that includes salmon, a fish rich in omega-3 fatty acids,
while on orbit aboard the International Space Station.

Dr. Scott Smith and his colleague Dr. Sara Zwart lead NASA’s Nutritional Biochemistry Lab at Johnson Space Center. The research discussed above was published in the Journal of Bone and Mineral Research (Volume 25, pages 1,049-57, 2010). In addition to ground-research studies, they lead two space station experiments: Nutritional Status Assessment and Pro K, which investigate the roles of animal protein and potassium in mitigating bone loss. In today’s blog Dr. Smith shares his thoughts and experiences as a scientist with the readers of A Lab Aloft.

11 thoughts on “Of Fish, Astronauts, and Bone Health on Earth”