This month, September 2012, marks the publication of a paper in the Journal of Bone and Mineral Research documenting how crew members that ate well, had good vitamin D status, and exercised hard maintained their bone mineral density. There are several remarkable things in and about this paper that I would like to share in this blog.

From a science perspective, this marks the first documentation of protecting bone mineral density during space flight. It’s amusing that I have already gotten several questions about whether or not we can tell if it was the exercise or the nutrition that made the beneficial difference. The answer is no, we can’t.

I suspect some folks would like to think it is just the exercise. I am quick to point out, however, that while I am somewhat biased as a nutritionist, I believe that all aspects were critical to the success of the program. There are plenty of non-NASA studies showing that inadequate nutrition leads to bone loss. I’ve also seen online summaries of research giving vitamin D the lead role—I guess it all depends on your perspective.

Regardless, nutrition (including and beyond vitamin D) and exercise are both very important. We are not going to set up experiments to determine if limiting one of these factors has a negative effect on bone, given that would clearly be the wrong thing to do for the crew of the International Space Station.

There has been immediate reaction to the Benefits for Bone from Resistance Exercise and Nutrition in Long-Duration Spaceflight: Evidence from Biochemistry and Densitometry paper. Some people feel that we can now proclaim spaceflight-induced bone loss a fixed problem and move on. This is clearly not the case, however, as what we found is that bone seems to be remodeling. In other words, bone breakdown still increases, but what happened here is that bone formation tended to increase as well, which appears to help maintain bone mineral density.

A big question remains: is the bone as strong after flight as it was before flight? Follow-on studies are underway to help answer this. Nonetheless, it is better to maintain bone mineral density with a question about strength, than to not maintain bone mineral density—which is where we’ve been up to now. We also hope to optimize both exercise protocols, for example using the Sprint Investigation aboard station, and nutritional aspects of bone health, as seen with the SOLO and Pro K studies. You can read more about these topics in my earlier blog entry on omega-3 fatty acid: Of Fish, Astronauts, and Bone Health on Earth. 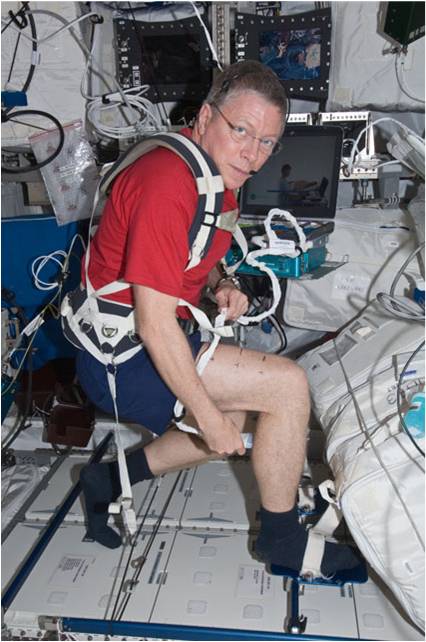 Another striking thing about this paper was the team. We had two of NASA’s bone experts, Linda Shackelford and Jean Sibonga; one of NASA’s muscle/exercise experts, Lori Ploutz-Snyder; and nutrition experts from NASA and ESA, Sara Zwart, Martina Heer, and myself. Getting all teams to come together to work on this paper required a fair amount of choreography, including agreements on presentation, interpretation and description of the data.

As an aside, in the late 1990’s Dr. Shackelford led an effort to conduct bed rest studies with resistance exercise here on the ground. She published results that mirror what we found in the flight study. Bed rest is a model of space flight, and results in a different magnitude bone loss, but nonetheless it provides evidence useful in assessing flight studies. This is a perfect example of why we test things on the ground first, but then also test them in flight. We want to be sure to know what happens in actual space flight.

Another unique aspect of this paper is the time it took to pull everything together. It was early this year, on January 26, Sara Zwart and myself were sitting in the office trying to assess what data from the Nutrition investigation we should look to try to publish next. I mentioned that we had not published any of the bone marker data, and perhaps we could look at ARED/iRED differences. ARED is the Advanced Resistive Exercise Device aboard station that the crew uses to simulate free weight exercises on orbit, while the iRED is the Interim Resistive Exercise Device used for upper body strength development. 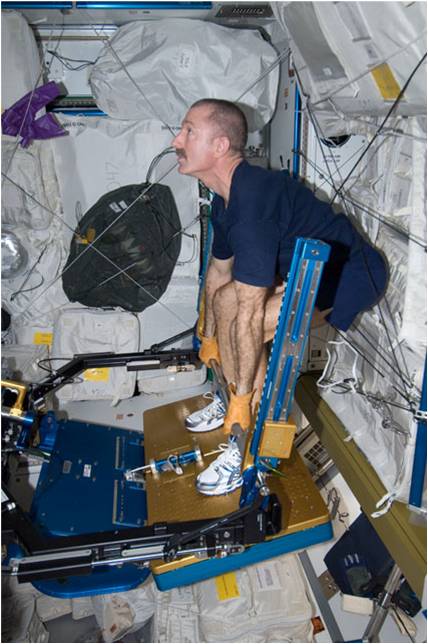 Sara and I met very early, around 1 the next morning, at the Telescience Center—one of the back rooms in Mission Control. We were waiting for the crew aboard station to awaken so astronaut Don Pettit could collect his FD30 blood sample for the Nutrition and Pro K studies. Sara mentioned that she’d looked at the blood and urine bone marker data, and there didn’t appear to be major differences between the groups: resorption (bone breakdown) wasn’t different, and formation trended up, but wasn’t overly striking. I asked Sara if she’d looked at the bone densitometry (DEXA) data to see what happened with bone and body composition, and she said no, but she would. She logged in to our lab database, and about 30 minutes later turned and said, “I take it back—there’s something there!”

I told Sara I would start working words, and she should start working tables. By 9:30 the morning of the January 27, 24-hours after we first discussed it, we had a 17-page draft of the manuscript, which included 3 tables of data and complete statistical analysis. It took us about a week (and some sleep) to clean up the draft, and we then sent it out to the coauthors to start the process of bringing in their expertise and adding in details. This was especially important regarding the exercise aspects and the bone measurement details, which elude us nutrition types, along with overall interpretations.

Essentially taking eight months from concept to publication, the journey for this paper is simply incredible! We’ve never had a scientific paper go from essentially the first look at the numbers to print this quickly before, and, well…you never count on something like this to happen again.

Cover of the September 2012 edition of the Journal of Bone and Mineral Research where the Benefits for Bone from Resistance Exercise and Nutrition in Long-Duration Spaceflight: Evidence from Biochemistry and Densitometry paper on astronaut bone health published. (Credit: JBMR)

Scott M. Smith leads NASA’s Nutritional Biochemistry Lab at Johnson Space Center. He completed his doctorate in nutrition at Penn State and conducted postdoctoral research at the U.S. Department of Agriculture’s Human Nutrition Research Center in North Dakota. Smith leads experiments, both on the ground and in space, aimed at improving astronaut nutrition. Smith’s two space station experiments include Nutritional Status Assessment and Pro K.  The Pro K study is designed to investigate the roles of animal protein and potassium in bone loss.