The International Space Station Program Science Office would like to dedicate this entry of A Lab Aloft to the life and work of astronaut Janice Voss, who passed away February 7, 2012. Her support NASA’s vision for science on orbit was a remarkable contribution to our research mission.

Janice Voss, Ph.D., was an astronaut and mission specialist for five space shuttle missions, logging over 49 days in space. These were physical science flights, including STS-83 and STS-94, which were historic re-flights to achieve a singular microgravity research mission. Voss also flew the first “commercial” Spacehab and the radar mapping mission.

With a real love for physical sciences, Voss used her dedication to research to determine her next role as NASA transitioned from the shuttle era to the station era. Voss was the only crew member ever selected to serve as a Lead Increment Scientist to represent the research community during experiment operations. She worked in this role during Expeditions 8 and 9.

“Her boundless enthusiasm for getting as much research done was contagious, especially welcome in the challenging time after Columbia,” remembers John Uri, her manager in the ISS Payloads Office at the time. “Her experiences from flying science missions as an astronaut were invaluable in optimizing the onboard research.”

The timing of her tenure, which followed the Columbia tragedy, led to one of the more interesting things that happened while Voss was Lead Increment Scientist. While the shuttle was grounded, researchers proposed experiments that could be done with existing materials on orbit.

The International Space Soldering Investigation, or ISSI, was one of these studies performed in microgravity. The crew used the soldering materials they had on orbit to make coupons and melt them, which led to an amazing result! The rosin that was in the solder boiled out to the outside of the coupons, orbiting around them. 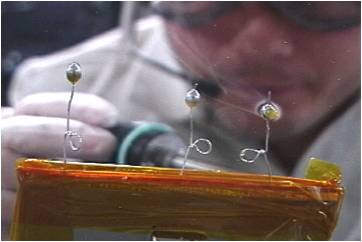 I remember how excited Janice was about this new finding. She worked with scientists to evaluate what caused the orbital effect, with the final determination pointing to Marangoni convection. Voss presented the results in a press briefing, including the incredible video of the experiment.

Later on, as Voss was assigned to different things in the Astronaut Office, she became the ongoing research representative for a number of years. There she represented the crew office, but always with the perspective she carried with her from her time as a Lead Increment Scientist, which made her viewpoint unique.

Voss had a natural scientific curiosity that prompted her to always try different things. She never accepted at face value how things worked, and would try alternatives to investigate further. This questioning nature was an exceptional attribute and helped to make her a success in her many roles with NASA.